IMF had announced its intention to sell 400 metric tons of gold a few months ago. They wanted to raise money to lend to weaker nations by selling some of their gold. At that time, — China, Russia and India had evinced interest in buying IMFâ€™s gold.

India finally bought half or — 200 tons of gold from IMF in the last two of weeks of October. The price tag was 6.8 billion dollars, which valued one ounce of gold at 1,045 USD. The transaction was done in hard cash, which I think means that India paid IMF in USD.

A lot of other countries (most notably China) have increased their gold holdings in the last year, so this is no surprise. Chinaâ€™s government holdings of gold increased to 1,045 tons this year from 400 tons in 2003. But, the deal was certainly big enough to push gold to all time highs yesterday.

After last yearâ€™s crisis, many countries are looking to diversifying their reserves and reduce their exposure to the US dollar. India had a relatively smaller percentage of gold in its reserves and RBIâ€™s data for October 23rd 2009 shows that the percentage is still below 4%. After October 30th, when the gold purchase is complete, the percentage should have risen to 6%. 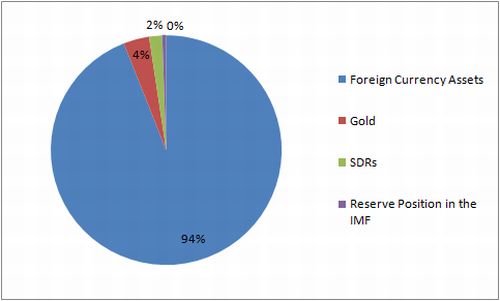 This makes RBIâ€™s gold holdings the tenth largest among central banks. India is of course the worldâ€™s biggest gold importer, and like almost everything else, China is the biggest producer of gold. So it remains to be seen if China will lap up the remaining IMF gold up for sale, and shore up its gold reserves even more.

I have mixed feelings about this, — on one hand, it is good to diversify away from paper currencies and have some presence in hard assets like gold, but on the other hand, India is buying gold at the top of the market. Buying anything at the peak rarely gives great returns, but this is more about safety than returns.

At some point in the future, these reserves should be put in use, and invested in assets that produce returns, rather than things, which are simply a store of value.

It has been about two decades since India saw its reserves dwindle to just about a couple of weeks of imports, but that memory is still fresh in some ways. It pushes the central bank to look for safe havens and not go through the nightmare of going to the IMF for funds. Much of Indiaâ€™s liberalization is also marked by the same cautious and measured approach, which helped a great deal last year when none of the Indian banks faced any problems and the country fared through the recession a lot better than most other countries.

I think the approach will change and India will become more aggressive when it comes to its reserves. That will take time though, and it is probably best for stability that it does take time before the country becomes really aggressive on this and other fronts.