Check out the review on the latest Coal India IPO here.

Orient Green Power IPO opened yesterday, and will close on September 24th. The offer is priced between Rs. 47 to Rs. 55, and has been graded 4 out of 5 by CRISIL.

Orient Green Power Limited is the largest independent operator and developer of renewable energy power plants in India with a total of 213.03 MW installed capacity. Currently, this is split out between Wind and Biomass with Wind energy forming the majority. 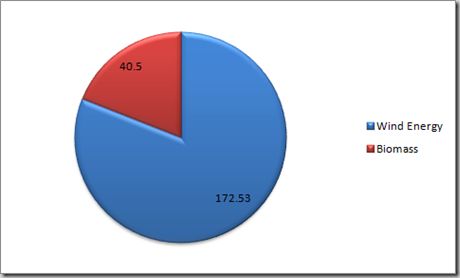 In the future they plan to add a small component of hydro electric power to the mix and increase the committed and development project capacity to 836.5 MW. Orient Green Power also derives revenues from the recognition of carbon credits.

Here is the break-up of planned energy generation from various sources: 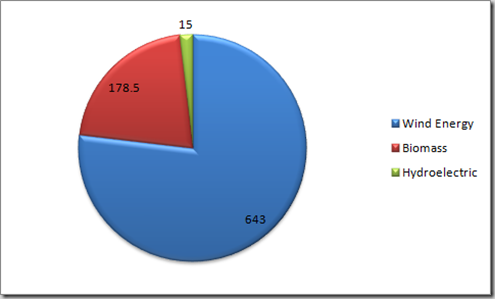 The companyâ€™s wind farms are present in Tamil Nadu and Andhra Pradesh, and in the future theyâ€™re going to expand to Maharashtra, Gujarat, Sri Lanka, Croatia, Czech Republic and Hungary. The customers for these wind farms are state owned electricity boards, and private customers who need to supplement their energy needs from conventional sources. The current wind farms are all acquired from third parties.

The company had revenues to the tune of Rs. 104.47 million in 2009, and Rs. 441.58 million in 2010, and a net loss of Rs. 113.08 million and Rs. 122.41 million respectively. Because of the limited history, and the planned expansion these financial numbers donâ€™t hold as much meaning as it would for a company for a much longer operating history.

The grading report by CRISIL also indicates that these numbers do not contain the profits from the wind business as the ownership of the wind assets was only transferred in Jan 2010, and the report says that they expect the financials to improve on profitability going forward.

Business Line reports the following about the pricing of this issue:

The price discounts the estimated FY-12 earnings 21 times. In terms of P/BV, other private power utilities enjoy valuations of over three times. Some discount is justified for OGPL due to the lower load factors likely for renewable energy, feedstock risks and the untested nature of the business. As their current portfolio of projects is small, investors need to hold on to the stock for a two-three year period to take advantage of the high earnings growth.

The company has a limited operating history, but has a lot of people excited because of the green energy space that it is in, and also because the market itself is relatively high, so more people are just generally interested in stocks and IPOs as well. However, at the end of the first day of opening there was hardly any retail interest, but that usually picks up as the end date approaches.

The IPOs this year have been a mixed bag, and it’d be interesting to see how this breed of green IPOs perform once they list on the market.

Click here to see how Indian IPOs performed this year.