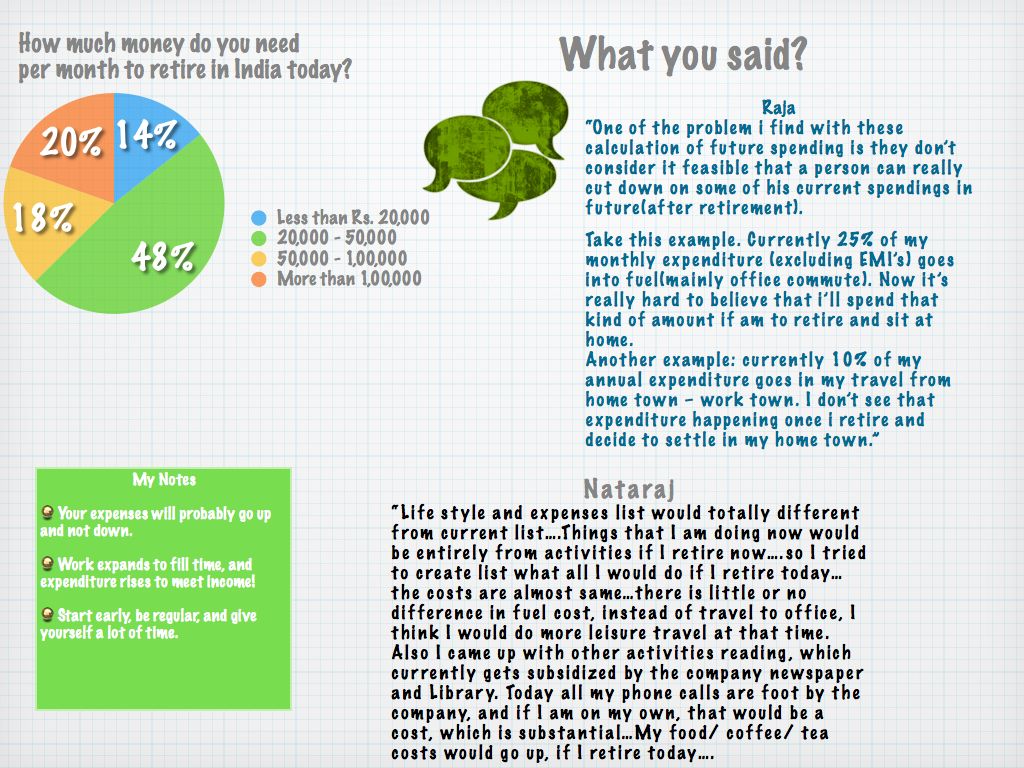 In this post, I am going to be what I think is called a party pooper, and say that a lot of you believe that you’ll need lesser money than you spend today during your retirement, but you are probably wrong.

For starters, if you’re salaried and not in your forties yet, then you are probably far away from what is going to be your peak income. Your income might look like a reasonable sum to you today, but wait till you start making a lot more, and see Parkinson’s second law kick into effect:

Now it’s true that you will have more responsibilities at that time than today, and a lot of those will not be present during your retirement, but it’s just as likely that there are some unforeseen liabilities as well; how is that percentage going to work out? How do you calculate something like that anyway?

Next up, when you think that you will need lesser money during retirement than today, that automatically implies that you need to save less today, and that in turn implies more money to splurge; think about it – aren’t you much more likely to lull yourself into making some assumptions that make spending easier today? After all, delayed gratification is hard, really hard.

That said, I believe that a lot of you are way ahead of the game just by thinking about retirement, and planning for retirement. Starting retirement planning early means that you develop a long term approach to retirement, think about various alternatives where you can invest your money, not fall in credit card debt, and give yourself the benefit of compounding which makes a huge difference.

As long as you are not looking at huge debt, saving a decent amount by being frugal (but not stingy), and making good investment habits, whatever your number is – you will be alright.

So don’t fret too much about the number, which is too far out in the future, and so variable that it’s hard to predict, and focus instead on developing good financial habits. And thank you all for your wonderful comments!

8 thoughts on “Poll results: How much money do you need per month to retire in India today?”