Motilal Oswal has come up with an interesting product in the crowded space of gold ETFs with its MOSt Gold shares ETF. The new fund offer for this opened on March 02 2012 and will close on the March 16 2012.

This is a gold ETF which means that the fund will buy physical gold as its underlying and trade on the stock market. It will trade on both the NSE and the BSE. In this respect, it is similar to every other gold ETF that exists in the market right now; what makes it different from all the other funds is that in this ETF you can actually redeem your units and get delivery of physical gold.

I’ve seen numerous comments from people who have said that they want to be able to redeem their gold ETFs with physical gold and Motilal Oswal has sensed this opportunity and brought out this unique product to cater to it.

If you remember the post about the difference between mutual funds and ETFs – I used this diagram there to show the process of creation and redemption of ETF units. 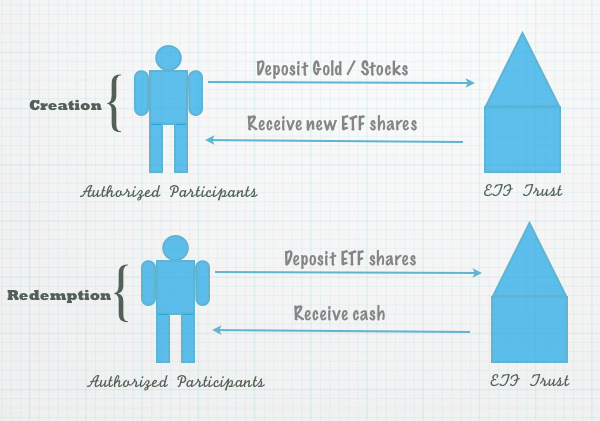 The same thing is applicable here as well, and the only difference is that they have made the redemption units really small by allowing investors to redeem just 10 grams of gold whereas for other ETFs this is a much larger number like a kilogram.

So, if you have 10 units which are equivalent to 10 grams of MOSt Goldshares you can ask Motilal to redeem your units for physical gold.

You don’t get exactly the price of 10 grams for 10 units because they will deduct transaction charges at the rate of Rs. 750 per 10 grams and Rs. 250 per 100 grams if you want to get physical gold (no charges for a kilo) and secondly the expenses of the scheme will be deducted from the NAV and as time progresses each unit will represent less than a gram.

MOSt Goldshares will charge 1.3% expense ratio which means that they will use up to 1.3% of the total assets under management to cover for their expenses. This money is reduced from the NAV so although one unit of gold ETF is supposed to represent one gram of gold – in reality it is always less than that. This is true for all gold ETFs, and in fact every other type of ETF also and that’s the reason you should always look for funds with the lowest expense ratios.

In this regard, there are a lot of funds with much lower expense ratios than MOSt gold ETF and these Motilal Goldshares fare worse than them as far as charging expenses to investors are concerned.

However, based on what people have reported here I think you will still get gold coins cheaper from them than you get them from banks – a good way to find out if that is true is to compare the NAV after this ETF lists to the daily prices of gold coins sold by banks and post offices and see how much of a difference is there.

To conclude, I think for someone who is looking to invest in gold electronically, a gold ETF with lower expense and higher liquidity is much better than this fund, but I know from comments here that there is a segment of people who are only interested in buying a gold ETF if it promises to redeem that unit into physical gold and I believe this is a good option for them. The one thing you will have to figure out is after you redeem this for gold units where will you sell them for cash because if you have to take those gold bars or coins to a jeweler and he charges you a deduction again (which they normally do) then you are stuck with yet another expense and it lowers your returns.