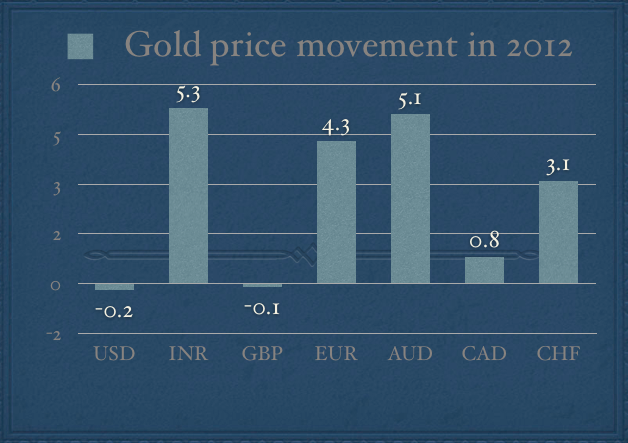 You donâ€™t think about currency exchange rates when you are buying gold because the two are generally not talked about together, and most people buying jewelery would perhaps be surprised to hear that the exchange rate has any bearing on gold prices at all.

However since India, and much of the rest of the world imports most of their gold for which they have to pay in a foreign currency, the price of gold domestically is impacted by the exchange rate much like the price of oil.

A good way to visualize this is to see how gold prices moved in 2012 priced in different currencies.Â  (Data from GoldPrice)

Part of this price difference is exchange rate, and part of it is domestic demand and supply, but I think it is really hard, if not impossible to distinguish which is which.

I think the relationship between USD INR and gold prices is going to be talked about a lot in the next few years because the Rupee has become a floating currency and it will continue to move a lot and gold is becoming more of a financial asset than anything else and that will mean that the demand also depends on peopleâ€™s appetite of gold as a financial asset instead of just jewelry.

4 thoughts on “The role of exchange rates in gold prices”