Bharti Infratel’s IPO is the biggest after Coal India’s IPOÂ back in October 2010, and I think I didn’t do a single IPO review in between these two as there weren’t many good companies that came out with IPOs in that duration.

Bharti Infratel is a subsidiary company of Bharti Airtel and it is the tower infrastructure provider to cellular phone companies. The company builds, operates and runs tower infrastructure for wireless telecom providers. It is going to be the first listed company of this kind as Reliance Infratel which had plans to list earlier this year didn’t go through with its IPO.Â

However that doesn’t mean there aren’t other companies in this business.Â This is a very competitive market and there are many players in the tower business (though not listed), there are players like BSNL and MTNL who handle their own portfolio, then subsidiaries of companies like Reliance Communications and Tata Teleservices, independent companies like GTL Infrastructure Limited, American Tower Corporation, Aster Telecom Infrastructure Private Limited and Tower Vision India Private Limited.

This ownership structure is shown in the chart below that I took from the prospectus. 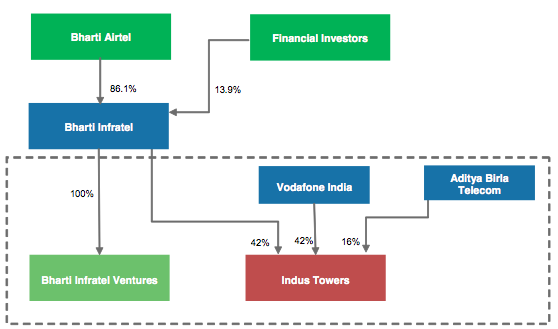 In 2012, Bharti Infratel’s consolidated revenues were Rs. 95,970.6 million. Indus revenues were Rs. 121,033.6 million, and Bharti’s Infratel’s 42% stake gives them Rs. 50,834.11 million from that. So, approximately 54% of Bharti Infratel’s revenues come from its stake in Indus. Â The take-away from this is that although the name and the 86% ownership stake of Bharti group may connote that the company depends on its promoter for the bulk of its revenue, that’s not quite the case and it also gets significant revenues from Vodafone and Idea Cellular.

The telecom sector has shown tremendous growth in the last few years, so it is no surprise that Bharti Airtel has also done pretty well in that time period.

The company also has a positive operating cash flow and has negligible debt, so it is in a good financial position.The diluted EPS for the 2012 was Rs. 4.29 and that gives you a rather high P/E multiple of 48.9 on the lower range of the IPO price band.

Based on the new number of outstanding shares and Profit After Tax last year of Rs. 7,507.3 million, you can calculate the new EPS post listing to be Rs. 3.97 and the new P/E multiple based on that as 52.9 times.

This valuation seems to be on the higher side to me, but Reuters has a story that talks about analysts using the EV / EBIDTA method and based on that number, the analyst concludes that the Bharti Infratel IPO is cheaply valued.

Objects of the Issue

That part of the money raised will go towards installation of new towers and upgrading existing towers. The prospectus lists down that the funds raised will be utilized to install 4,813 towers among other uses for the funds.

The IPO will open on December 11th 2012 for retail investors and will close on December 14th 2012, and will offer investors an opportunity to invest in a company that gives them exposure to a new area as no other company is tower business is currently listed. The financials of the company are good, and so it’s only a question of valuation and people investing in the company will have to take a call that the IPO is fairly valued, and that they won’t be able to get this share at a lesser price in the future after the stock starts trading in the market.