I am sure a lot of you have come across this article that presents a number of charts presenting the USD-INR rate in a time period before the general elections and shows how the Rupee has depreciated every time there has been an impending election.

I came across this article on Saturday, and didn’t think much of it which shows how poor a blogger I am, not because of the substance of the article but because I completely missed its potential to go viral.

I have the following reservations about the claim:

2. If Rupee was being brought into the country, the price of the Rupee would appreciate, not depreciate.

3. UPA has taken a series of very unpopular steps to try to rein in the Rupee fall, and in the current case, the fall of the Rupee has angered a lot of people who are already quite frustrated with the efforts of the government is every direction. How does the ruling party decide that the 20% extra cash is worth the pain it causes to the populace (in terms of lost votes) and the fodder it gives to the Opposition to exploit this depreciation?

4. Speaking of Opposition, how is it that only Congress is able to benefit from this depreciation, and not the BJP?

In one of the comments, the authors have explained point number 2 by saying that politicians deposit USD in Swiss accounts of businessmen and then those businessmen transfer money in INR in India itself so that takes care of the Rupee not appreciating. If this were happening then yes, I think this is certainly a way that they could overcome the problem of Rupee appreciating when it is send back to India, but I find it hard to believe this is actually happening.

The other points speak for themselves except for 5.

I dug up some exchange rate data since the year 2000, and with some simple Excel work – found out how many times has the Rupee depreciated more than 15% in a 12 month period since the beginning of 2000. Now if you were to just look at months, then there would be just many many months after 2008, but I tried to lump together the data so that when I started with September 2013, the month before that was at least 6 months earlier. Here are the results of that.

After 2008, these falls in a 12 month period have been much more frequent than before 2008. The data in the Havala post is different because at times their range is less than 15%, and at other times their period is more than 12 months. I increased the time frame on my datas-set to 18 months to see what would happen and even those numbers are similar. Prior to 2008, not many big moves, and after 2008, quite a few moves.

Here is a chart on how the Rupee has moved against USD from the beginning of 2000. 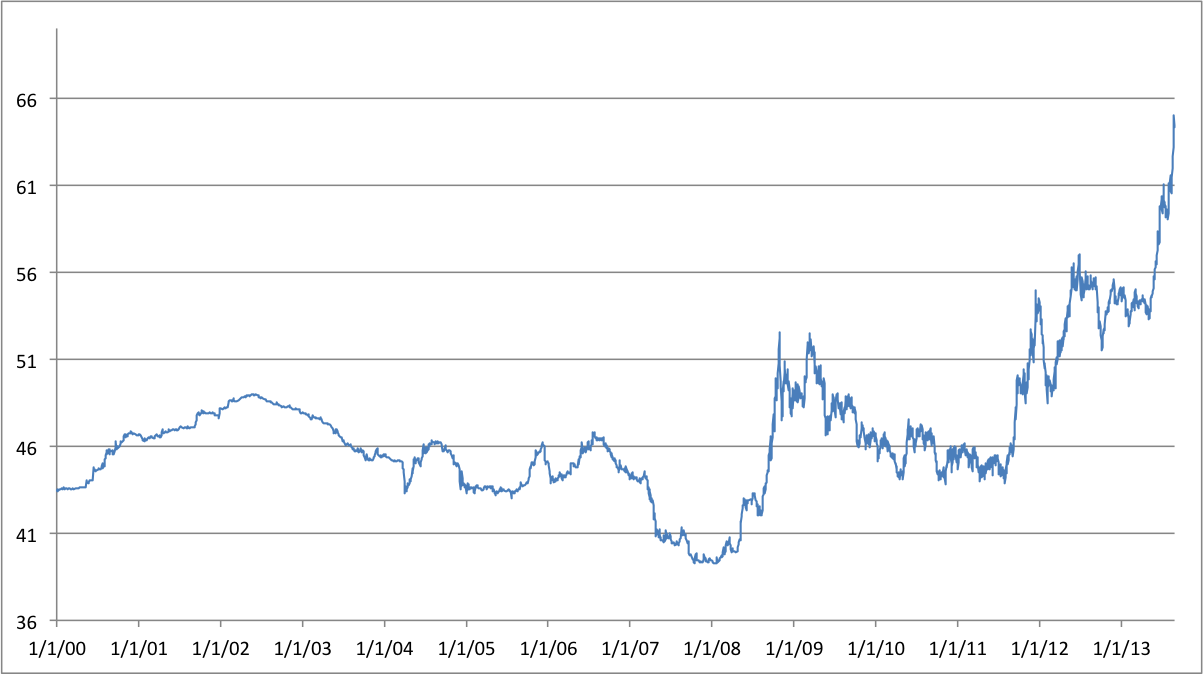 This chart also shows that the Rupee has been quite volatile post 2008 but prior to that moved in a narrow range. That’s the only conclusion I can draw from this movement, linking it to Congress bringing back black money during election times makes for a good conspiracy theory, but I simply don’t see how this can be actually carried out.

This is a post from the Suggest a Topic page.