What the Finance Minister P Chidambaram must have advised the RBI’s ex-Governor D Subbarao not to do and what he must have wanted US Federal Reserve Chairman Ben Bernanke not to do, the former Chief Economic Advisor, Raghuram Rajan has done exactly that in his first ever monetary policy as the new Governor of the Reserve Bank of India.

Actually, Dr. Subbarao resisted tinkering with the key policy rates in July, as he wanted the markets to initially believe that his policy actions were temporary in nature and he would reverse those measures quickly, as and when there is some stability in the currency markets. But, nobody could stop the market participants to panic at that point in time and the rupee to fall from 58-59 against the dollar to 68-69 in less than a month’s time.

Just before Dr. Rajan took charge at the Mint Street, markets were in a state of disarray. There were a number of pressure points, which were taking the global markets down and making the analysts predict NSE Nifty to touch 4,800. Those pressure points included a possible US attack on Syria over Syria’s use of chemical weapons, a high possibility of QE3 tapering by the US Federal Reserve, India’s trade deficit to remain high due to low exports & high imports, Indian rupee touching a psychological 70 mark and so on.

Call it a perfect luck or whatever, since then the global markets have seen all these fears receding very smoothly one by one. Tensions over Syria have come down considerably, India’s trade deficit has gone down to $10.9 billion in August, the rupee has recovered to below 62 levels and most importantly, US Fed has postponed its tapering programme till the time it sees the US economy growing the way they want it to grow.

Today was Dr. Rajan’s first serious test as the new Governor of the RBI. So, let us check what exactly Dr. Rajan has done in his first monetary policy and what exactly he wants to do with those measures.

0.25% hike in the Repo Rate to 7.50% – RBI has increased the Repo Rate by 25 basis points from 7.25% to 7.50%. This is the rate at which the commercial banks borrow money from the RBI for a short period of time. RBI has increased this rate to discourage banks to borrow and further lend money in the market, as the dangers of the inflation moving up have increased dramatically with a steep fall in the value of rupee since its last monetary policy.

So, what actually made him raise the Repo Rate? The answer is rising overall inflation, due to steep fall in rupee and upsurge in food inflation (including onions).

0.75% reduction in the MSF Rate to 9.50% – RBI has reduced the Marginal Standing Facility (MSF) Rate by 75 basis points from 10.25% to 9.50%. This is the rate which the RBI charges to the scheduled commercial banks for the money borrowed for their overnight liquidity requirements.

If you had made any investment in gilt funds or income funds during April-June period, then you must remember RBI’s first move in July to curb speculation in the currency market. RBI had hiked the MSF Rate very steeply by 200 basis points from 8.25% to 10.25%.

Now, the RBI has cut this rate to give some relief to the banking system for which the cost of borrowing money under this window had increased considerably. Also, RBI has been able to reduce this rate as the dangers of the currency volatility have reduced in the recent few days.

0.25% hike in the Reverse Repo Rate to 6.50% – RBI has increased the Reverse Repo Rate by 25 basis points from 6.25% to 6.50%. This is the rate at which the banks deposit their excess money with the RBI for a short period of time. This rate is linked to the Repo Rate and remains 1% below the Repo Rate. These are not the times of abundant liquidity in the banking system, so there is not much significance of hiking this rate.

Minimum daily cash reserve requirement reduced to 95% of deposits from 99% – This is the RBI’s second measure in favour of improving the sentiment in the banking system. In its second big move on July 23, RBI hiked the minimum cash reserve ratio (CRR) requirement of banks from 70% of their deposits to 99%. Today, Dr. Rajan reduced this requirement from 99% to 95%. This move is going to provide some elbow room to the banks as far as the liquidity is concerned.

No change in Cash Reserve Ratio (CRR) – RBI has left the CRR unchanged at 4%. Despite SBI Chairman, Mr. Pratip Chaudhuri, asking the RBI to cut the CRR many a times in the past, Dr. Rajan also did not bulge and decided to continue walking the same path as used by his predecessor.

What happened today here in India was the exactly opposite of what happened in the US on Wednesday. Most of the people had expected the US Fed to announce some sort of QE3 tapering, be it of a smaller quantum, but Fed’s decision to leave it unchanged left the market participants pleasantly surprised.

Today, most of the people had expected the RBI Governor to start it from where the Fed had left it that day. Markets had expected Dr. Rajan to remain dovish and reverse most of the harsh steps the earlier Governor had taken. But, people were left extremely disappointed to have a hike in the Repo Rate and a token relief on the liquidity front.

Impact on Stock Markets: After yesterday’s big upmove and immediately after the RBI’s announcements, BSE Sensex and NSE Nifty nosedived to reverse all of their yesterday’s gains and thereafter recovered somewhat to close at 20,264 and 6,012 respectively.

Impact on Currency: Though a hike in the Repo Rate should have boosted the value of Indian rupee, but a fall in both the equity market as well as the debt market resulted in rupee closing at 62.24 vs. yesterday’s 61.77, a rise of 47 paise in the value of one dollar. 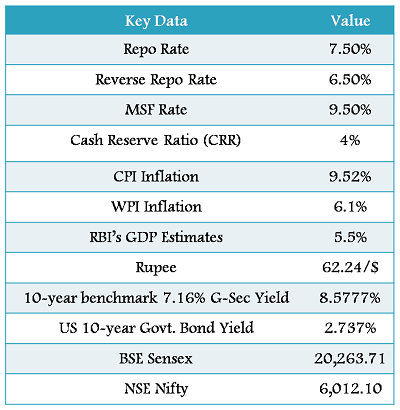 It is such a pity that even after such a wonderful Rabi season early this year and some excellent monsoon rains in most parts of the country in the last few months, we are still struggling with a double digit food inflation. The government, which is not able to manage the supply of onions in some of the major cities of India, makes big claims to ensure food security in the remote parts of the country.

The steps Dr. Rajan has taken today, I think any sensible RBI Governor would have taken the same steps, including Dr. Subbarao. Till a few days back, Dr. Rajan’s press conferences used to reflect what the Finance Ministry’s priorities were. But, the erstwhile Chief Economic Advisor is now the Governor of the Reserve Bank of India and I think his responsibilities are his priorities now. That is what got reflected in the RBI’s monetary policy today.

I think Dr. Rajan has taken a balanced decision by increasing the Repo Rate to tame inflation and by reducing the MSF Rate to cut short-term funding costs in the banking system. After today’s 75 basis points reduction in the MSF Rate, the differential between the Repo Rate and the MSF Rate stands at 200 basis points now. I think Dr. Rajan would like to take it down to 100 basis points again, by the end of November 2013. How, what & when he does it, it will depend on the domestic as well as some of the global factors. Will he succeed in his efforts or not? As always, only time will tell. But, as an Indian, I hope he does!