Infosys did it a few days back, now it was the turn of Dr. Raghuram Rajan. I mean both had made people to have low expectations and then delivered somewhat better for markets to cheer the outcomes on both the occasions. In his second review of monetary policy, the Reserve Bank of India Governor, Dr. Raghuram Rajan, did not do anything unexpected to annoy the markets.

In fact, markets cheered the fact that most of his policy related decisions were along expected lines and there were a few announcements with which he intends to further streamline India’s financial sector.

Before we take a look at what he has in store for us, let us first check what he has done in the current policy itself.

0.25% hike in the Repo Rate to 7.75% – RBI has increased the Repo Rate by 25 basis points from 7.50% to 7.75%. This is the rate at which the commercial banks borrow money from the RBI for a short period of time. RBI has hiked this rate second time in a row to discourage banks to borrow and further lend money in the market, as the inflation has again started moving up with a steep fall in the value of rupee due to fears of QE3 tapering by the US Federal Reserve.

Though I had a minor hope from him to leave the Repo Rate unchanged, but then it was too much to ask for in a highly inflationary environment.

0.25% reduction in the MSF Rate to 8.75% – RBI has cut the Marginal Standing Facility (MSF) Rate by 25 basis points from 9% to 8.75%. This is the rate which the RBI charges to the scheduled commercial banks for the money borrowed for their overnight liquidity requirements.

After this cut, Dr. Rajan has restored the corridor between the Repo Rate and the MSF Rate back to its normal level of 1%.

No change in Cash Reserve Ratio (CRR) – Along expected lines, RBI left the CRR unchanged at 4%. RBI felt that there was no requirement for such a change and market participants feel it was again the right decision.

Doubled bank’s borrowing limit to 0.50% under longer tenor repo – Dr. Rajan also doubled the borrowing limit of banks against their cash positions or NDTL (Net Demand and Time Liabilities) with immediate effect from 0.25% earlier to 0.50%, for both 7-day and 14-day repos, in order to increase the required liquidity in the system.

As widely expected, the central bank also reduced India’s GDP growth forecast for the current fiscal to 5% from 5.50% it projected earlier.

There were no surprises in the monetary policy this time as the policy actions taken by the RBI were widely expected. Most people had expected Dr. Rajan to hike Repo Rate, reduce MSF Rate & leave the CRR unchanged and he did exactly that. So, zero negative surprises actually turned it into some positive surprises for the investors.

Impact on stock markets – Around 11 a.m. in the morning, markets were trading marginally in the red. As the policy announcements were made, markets jumped initially, then came down a little, but then moved steadily up as there were no incremental negative moves by the RBI. BSE Sensex closed up 358.73 points (or 1.74%) at 20,929 and NSE Nifty closed up 119.80 points (or 1.96%) at 6,221.

Impact on debt markets – 10-year benchmark 7.16% G-Sec yield closed at 8.54%, 12 basis points lower than Monday’s close of 8.66%. It was a good news for the debt fund investors as most of these schemes ended the day on a positive note. 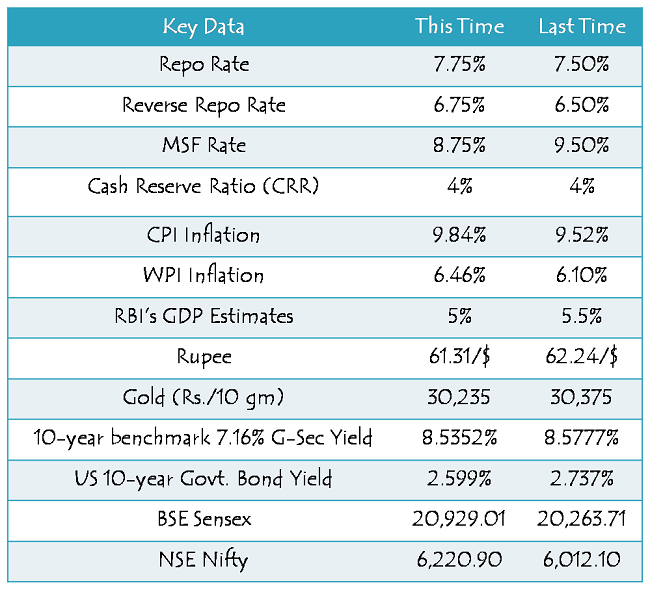 1. Introduction of inflation-indexed NSS – RBI plans to introduce inflation-indexed National Saving Securities (NSS) for the retail investors in November or December after consultation with the government. Nobody knows its structure as of now but it will definitely open a new investment avenue for us.

2. Introduction of 10-year IRFs – RBI also plans to introduce cash-settled 10-year interest rate futures (IRFs) from December end. The guidelines for the same would be issued by the RBI by mid-November. I think, if introduced with the correct framework, it would be one of the most useful instruments for the market participants.

3. “Near-National Treatment” to foreign banks – RBI announced today that foreign banks, which set up wholly-owned subsidiaries here in India, will get some special treatments, closer to what nationalised banks get, including the freedom to increase their branches here. I think some serious foreign banks would take this move as a very positive step by the RBI and it could result in some M&A activity also in the banking space.

During Dr. Subbarao’s tenure as the RBI Chairman, the Finance Ministry was desperate to bring back growth to the government’s targeted levels of 6.1% to 6.7%. It was leaving no scope to make Dr. Subbarao reduce interest rates even when he was not fully convinced about the government’s seriousness to take policy actions.

I think Dr. Rajan has been taking the same policy actions what Dr. Subbarao would have taken. But, I think increasing the Repo Rate may not be a great idea to bring down food inflation or to make US Federal Reserve to postpone its QE3 tapering indefinitely. Higher interest rates at this stage may only worsen India’s growth prospects with no or minimal impact on inflation which is rooted more in supply-side constraints.

Again, it is the government which is required to manage its finances in an efficient manner and take some policy initiatives for us to have lower inflationary numbers, lower fiscal deficit and to augment India’s economic growth. But, I think it is too late for this government to take such bold policy initiatives. What do you think?