After a brief rally in its value, Indian rupee has been falling again. Concerns of higher fiscal deficit, higher current account deficit and rising inflation have again started putting enormous pressure on the rupee, due to which it fell to 63.44 in today’s trade, before closing at 63.24 against the dollar.

Falling rupee makes our imports costlier and that ways we will again have a higher inflation, which in turn will result in higher interest rates. Yield on India’s benchmark 10-year govt bonds once again crossed the psychological mark of 9% today before closing at 8.95%. It indicates that we are in a difficult situation as far as cost of capital is concerned and it is going to put more pressure on corporates’ profitability figures.

For quite a long time now, India has been struggling to contain its trade deficit and current account deficit (CAD). Department of Commerce today released the trade deficit data for the month of October at $10.56 billion. While import figure stood at $37.83 billion, India exported goods & services worth $27.27 billion during last month.

Though the current trade deficit data is not scary, it is not great either. Gold imports have been tied at artificially lower levels by imposing steeply high import duties. Gold prices, which have been ruling significantly lower in the international markets at $1282/oz, are ruling at around Rs. 30,000 per 10 gram here in India. So, this way, current buyers are paying higher prices for gold just to benefit those people who earlier bought it cheaper and the government by paying higher taxes.

Moreover, infrastructure & capital goods sector are also bleeding here in India. So, our imports of heavy machineries & other capital goods are also in a state of crisis. That also must have contributed to lower imports. 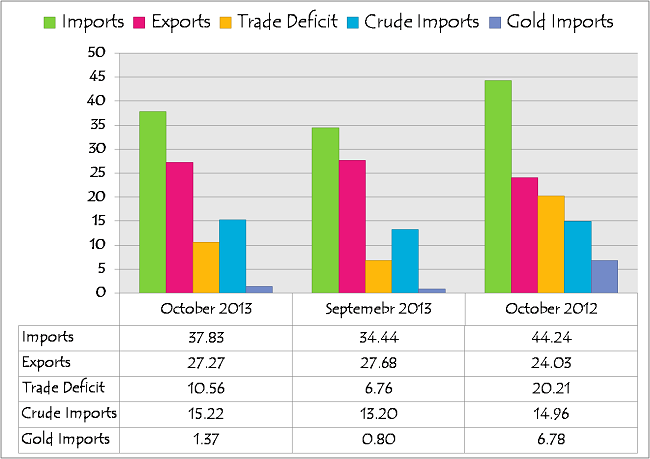 (Note: Figures are in US $ billion)

Gold Imports in October were at $1.37 billion as compared to last month’s $0.8 billion and last year’s $6.78 billion. The lower this number remains, the better it is for the Indian economy. But, with the marriage season starting, it is expected to remain higher this month also.

Oil Imports in October came out at $15.22 billion as compared to last month’s $13.2 billion, an increase of 15.3% and last year’s $14.96 billion, a jump of 1.7%. Thanks to lower international crude prices and rupee appreciation in October, this figure came out lower. Slower economic activity should keep our oil imports in check in the coming few months also.

Exports in October stood at $27.27 billion as against last month’s exports of $27.68 billion, a decline of 1.5% and last year’s exports of $24.03 billion, a rise of 13.5%. Thanks to a steep depreciation in rupee, our exports have been rising for the past four months. With continued pressure on rupee, it is expected to see this momentum also to continue in the coming months.

India has set an export target of $325 billion for the current financial year. I think we should not rely only on services exports for this momentum to continue and diversify our exports by focusing on manufacturing & exporting quality products.

Imports in October stood at $37.83 billion as against last month’s imports of $34.44 billion, a jump of 9.8% and last year’s imports of $44.24 billion, a decline of 14.5%. This is a concern area for the Indian economy. We are becoming too dependent on products manufactured outside our country that it is becoming extremely difficult to contain our imports without some curbs being imposed.

With import curbs working in our favour and exports keeping the momentum, India’s biggest worry of high current account deficit is finally coming under control. Now, the government should target keeping inflation and fiscal deficit under check. These two factors are potentially very dangerous to disturb all the financial calculations that the financial ministry has done for its current financial year.