Central Depository Services (India) Limited (or CDSL), a 50.05% subsidiary of the Bombay Stock Exchange (BSE), has launched its initial public offer (IPO) from June 19 in the price band of Rs. 145-149 a share. The company is expected to raise Rs. 524 crore in this issue and the same will remain open for the next two days only to close on June 21.

This IPO is actually an offer for sale by some of CDSL’s existing shareholders, BSE, State Bank of India (SBI), Bank of Baroda and The Calcutta Stock Exchange, and that is why, the company is not going to get any money for any of its expansion plans or to retire any of its debt. Its other shareholders, HDFC Bank, Standard Chartered Bank, Canara Bank, Bank of India and Union Bank of India, are not selling any stake in this IPO.

Before we take a decision to invest in this issue or not, let us first check out the salient features of this IPO:

Price Band – The company has fixed its price band to be between Rs. 145-149 per share and no discount is getting offered to the retail investors.

Size & Objective of the Issue – CDSL will issue around 3.52 crore shares in this issue at Rs. 149  a share to raise Rs. 524 crore from the investors. Out of this amount, the company plans to use crore for repayment/prepayment of some of its loans and redemption/early redemption of its NCDs, crore for the construction and purchase of fit outs for its new stores and the remaining proceeds for general corporate purposes.

No Discount for Retail Investors – As mentioned above also, the company has decided not to offer any discount to the retail investors.

Listing – The shares of the company will get listed only on the National Stock Exchange (NSE), as the Bombay Stock Exchange (BSE) holds a majority shareholding in the company pre-IPO and as per the SEBI regulations, a stock exchange and its subsidiaries cannot get listed on its own exchange. The listing will happen within 6 working days after the issue gets closed on 21st June. June 30th is the tentative date for its listing.

Here are some other important dates after the issue gets closed:

Credit of equity shares to investors’ demat accounts – On or about June 29, 2017 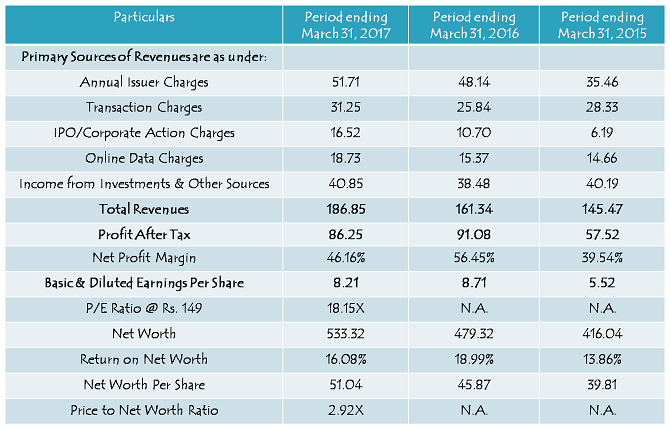 At Rs. 149 a share, CDSL IPO is priced at 18 times its FY 2016-17 earnings and 2.92 times its net worth as on March 31, 2017, which seems fairly valued to me. In terms of market share, CDSL has been an outperformer, despite NSDL being a dominant player as far as use of technology is concerned. But, that is something CDSL has been doing at the cost of operating revenues and/or margins. It has grown at a steady pace all these years, but I would call it a dull show as the company has not been able to grow its revenues, profits and margins in line with its growth in market share.

Going forward, the business is expected to grow rapidly as the market sentiment has changed dramatically in the last 5-6 months and is expected to remain buoyant going forward as well. But, as the SEBI regulations limits extraordinary price changes by these depositories, I expect CDSL to grow at a relatively moderate pace only. No fireworks are expected in its operating revenues going forward and thus, would advise investing in it just for the listing gains only and not for medium to long-term wealth creation.