LIBOR stands for London Inter Bank Offered Rate. It is a very important interest rate that is used to track the rate of short term lending between the participating banks in the London money market.

LIBOR is determined on the basis of the interest rate at which participating banks lend to each other for the very short term. It is determined every day at 11:00 AM London time and is set for as long as an year and as short as one day. It is important to note that LIBOR is the underlying rate for lending unsecured funds by one bank to another.

LIBOR is one of the most active interest rate in the money market and a lot of derivative products are priced based on LIBOR.

How does such a dull thing affect me?

When reading about LIBOR, the images of gray-haired bankers in dark suits comes to mind and it seems LIBOR is something which gets set in a distant world. It doesn’t seem like something that impacts our everyday life.

That is not entirely true. Ultimately LIBOR and the Fed rate are the base rates upon which all other interest rates depend. A low LIBOR means the APR on your credit card and your Adjustable Rate Mortgage (ARM) will also be low. A higher LIBOR means a higher credit card APR and ARM.

The LIBOR does not move much day to day, and any violent upwards move in the LIBOR means that banks are scared of lending to each other. They demand a higher rate of interest to lend to each other to compensate for the additional risk that they perceive.

Take a look at the chart below which shows the daily LIBOR rates from April of this year till October. The chart shows how LIBOR was stable for most of the year and then suddenly spiked up in the days of the credit crunch. 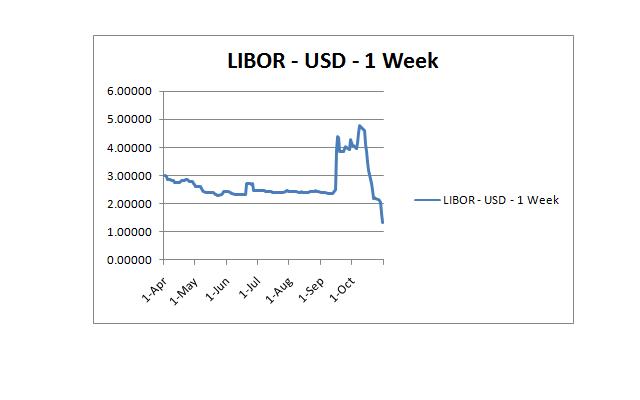 The chart clearly shows what happened during the credit crunch. Banks got so scared that they hiked up the rate, twice or thrice of what they were, overnight. So that basically translates into paying 15% APR on a credit card and then waking up to find that the APR has been hiked to 45%!

When Paulson and Bernanke talked about unclogging the financial arteries of the world, this is what they were talking about. By injecting liquidity and pumping funds into banks, they ensured that the banks start lending to each other again and the interest rates ease up.

Ultimately, LIBOR is more a measure of the base rate upon which all other rates get set and that is why it is one of the most tracked interest rates.