Inflation is on everyoneâ€™s minds these days, and when someone brings up this topic, they usually talk about food inflation, and how milk has gotten expensive and tomatoes have shot through the roof.

I thought Iâ€™d see how the data around this looks,Â  and I went to the website of the Ministry of Commerce and Industry, and downloaded the Wholesale Price Index (WPI) for 2010.

From there I calculated the percentage inflation on various items, and found these results. These are the food articles that have gained in price in 2010. 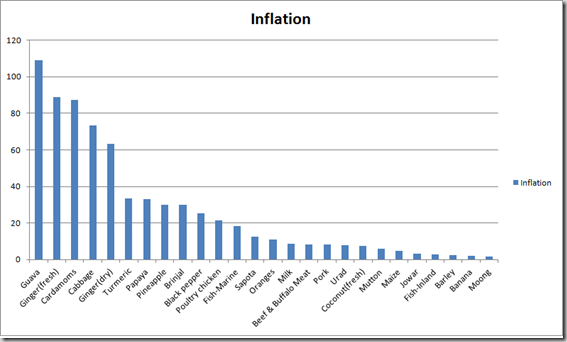 Not everything went up this year, there were a few things that went down as well. Here is a chart that shows those. 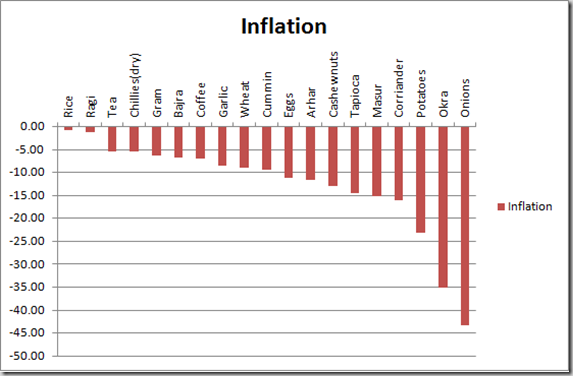 I was a little surprised to see that onions have fallen in prices so sharply, but on further research I found that this is only due to a higher base in the beginning of 2010. The wholesale price of onion was up to Rs. 1200 â€“ Rs. 1300 per quintal in Nashik at the beginning of the year, and was reduced to half of that by May.

I saw a story on Financial Express from May that a bumper onion harvest is expected this year, and the production is expected to grow to 8.5 lakh tons from 7.6 lakh tons last year.Â  The fall in potato prices also seems to be due to the high base effect, and I wonâ€™t be surprised if other fall in prices can be explained by that as well.

Monsoon seems to be progressing well, and one can only hope that inflation (at least food inflation comes under control), and doesnâ€™t rear its ugly head again.

PS. The numbers on tomatoes were all screwed up, so I couldnâ€™t include them in these calculations.

3 thoughts on “Are onions really cheap?”