I was looking at the per capita consumption of electricity by Indian states and I noticed two interesting things in there. Well three actually, but the third one is something that you would come to expect anyway.

The third thing that you would come to expect is how low this number is – for the last year the per capita electricity consumption for India was 778.71 kWh, which is quite low when compared with industrialized countries, or even other emerging economies.

Here is a chart that shows the per capita electricity consumption for a few countries of the world.

The government data breaks out the per capita electricity consumption by states, and also regions, and that shows a huge disparity between the various regions.

Intuitively, you know and think about this disparity but still when you see the number right in front of you that is lending something concrete evidence to what’s otherwise just a gut feel.

Here is the per capita electricity consumption for the various regions.

The thing that stands out from the above chart is how low the number for the North East region is. If you remember my earlier post about the per capita income of different states then we saw there that a lot of the North Eastern states didn’t do as well as the national average, but they weren’t so far below the average either. In this case the average is just about a third of the national average.

Is it because the data is bad, or is due to some other geographical reason?

Now, let’s take a look at the state wise break up shown in the following charts. 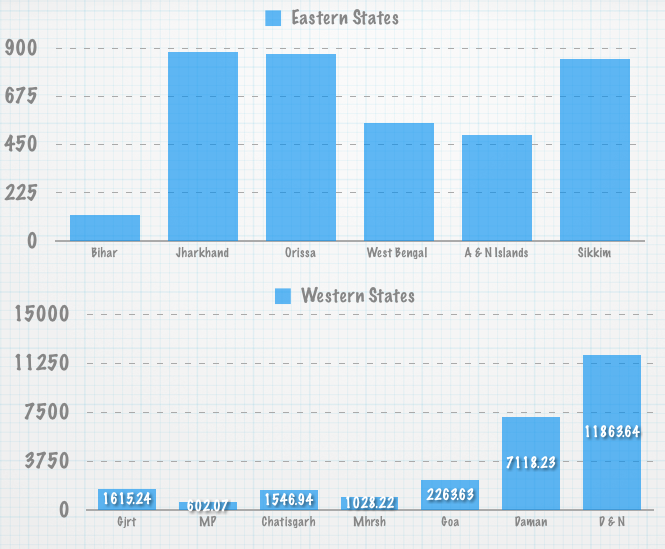 This data more or less falls in line with the other state level data we have seen in the past viz. the unemployment in India broken down by states, or the per capita income by states, and hammers in the stark disparity between the regions, and the inter linkages between the various parameters.

The more I look at these type of numbers the more I get convinced that in order to grow steadily and consistently it’s important to focus on a few important things at the same time, and also what a long way to go there still is to meet global averages.

Take whatever per capita number you want – the results are always so abysmal – maybe that’s where the focus should be instead of talking about big aggregate numbers all the time.

5 thoughts on “Per Capita Consumption of Electricity: Indian States”