Two debt issues opened for subscription on September 17 – India Infoline Finance Limited (IIFL) 12% NCDs and HUDCO 8.76% Tax-Free Bonds. Both these issues have seen reasonably good response from the investors. But, still there are many people who have not been able to take a decision and probably require some more help or some detailed research. Let us try to do a comparative analysis of the two.

A couple of days ago Vijay asked me to illustrate IIFL NCDs with a numeric example, involving rupee values of return.

Can you illustrate IIFL with some numeric example. I am sure, most of the reader does not understand yield definition very well.

As I did not want to edit the original post, I could not fulfill his desire. But, now I can get his request fulfilled by comparing numeric examples of both IIFL NCDs and HUDCO tax-free bonds. 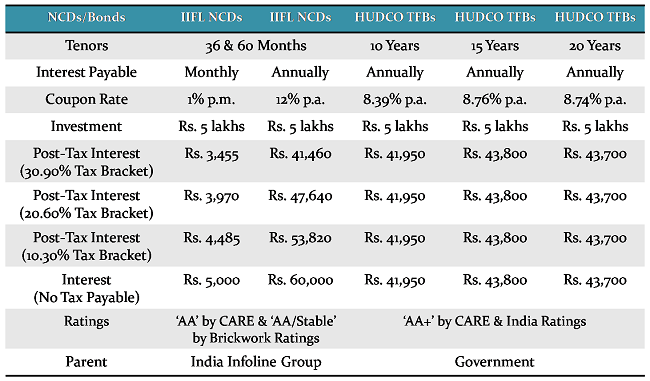 There are many factors which should determine your decision and I am going to state those factors here:

IIFL has a maturity period of 36 months & 60 months, whereas HUDCO is available with tenors of 10 years, 15 years and 20 years. So, which one should you invest in? If you think there is still more room for interest rates to rise, you should go for IIFL NCDs and if you agree with my view on the interest rates, then you should go for the HUDCO 20-year or 15-year bonds.

Investor’s Tax Bracket – First, you should determine your income tax bracket for the current financial year and try to foresee it for those financial years also till which you are planning to stay invested in these NCDs/bonds. If you fall in one of the higher tax brackets, then I think it is better to invest in HUDCO tax-free bonds as paying tax on 12% interest income from IIFL would make it 8.29% in the 30% tax bracket and 9.53% in the 20% tax bracket.

I would say earning 8.76% with tax-free bonds with safety of a government company and ‘AA+’ rating clearly makes me favour HUDCO bonds. If one is not liable to pay any tax on the interest income earned, then only I think IIFL NCDs would score over HUDCO bonds. It is up to the investors to decide if they fall in the 10% tax bracket.

Ratings, Safety & Business Model – IIFL NCDs are rated ‘AA’ while HUDCO bonds are rated ‘AA+’, a difference of just one notch. But, practically there is a lot of difference. IIFL is a private company and a 98.87% subsidiary of India Infoline Group. It is a relatively newer company with business model concentrated in two major segments, mortgage loans and gold loans.

HUDCO is a wholly-owned corporation of the government of India. It has a relatively stable business model with financing of housing and urban infrastructure in many major cities across India. IIFL’s business model is relatively riskier than HUDCO. This factor also goes in HUDCO’s favour.

Issue Size – While HUDCO is planning to raise Rs. 4,809.20 crore from its issue, IIFL wants to raise Rs. 1,050 crore. How the issue size matters? The bigger the issue size, the higher is the liquidity in the secondary markets. Higher liquidity provides easier exit option to its investors. So, I think the issue size is also positive for HUDCO bonds.

Listing – While the issue size of IIFL is smaller than HUDCO’s issue size, it is going to list on both the stock exchanges, Bombay Stock Exchange (BSE) as well as National Stock Exchange (NSE). HUDCO bonds are going to list only on the BSE. Though the issue size of HUDCO is big and there will not be any liquidity problem as such, but still it would have been better if the company could have got it listed on the NSE as well. This augurs well for IIFL NCDs.

While the whole world cheers the US Federal Reserve’s policy decision not to taper QE3 and to keep its bond-buying programme steady at $85 billion per month, I think it presents a perfect platform to the Governor of RBI, Dr. Raghuram Rajan, to bring back the much awaited normalcy in the Indian bond and currency markets. If he succeeds in doing that, I think the bond investors are up for a really good time. They should then be subscribing to these bonds at these really attractive interest rates.