Chauhan left the following comment on the Suggest a Topic page recently.

I’m keen that we somehow start a theme that compares keeping your money abroad (in say USD, GBP or SGD etc) vs sending it to India for investment purposes. Which is to say, how do foreign currency gains v the Indian rupee compare with high interest rates (on a/c of high inflation) in India.

My first impression was that it was indeed futile for most NRIs to send their money back home for investing because of how fast the Rupee has depreciated recently, but further digging revealed that it wasn’t really the case.

NRE accounts were made tax free, and the interest rate was raised to domestic savings rate on them in December 2011, and at that time there was quite a lot of excitement about them, and a lot of money did find its way to Indian NRE accounts.

So, roughly speaking, if you were an American NRI who were thinking of opening a NRE bank account back in December of 2011, but didn’t do anything yet (28 months) you had a 17% return.

However, if you had invested your money in a NRE account at that time then you would have made about 25% on your money. This is assuming the NRE rate was 10% for 28 months, which is the rate several banks were offering at the time, but none are offering today. The rates are around 9% right now.

So, if you were in the US then it was obviously better for you to have sent money home, and opened a NRE account, but what about other countries?

I plotted the same data for some other countries UK, Singapore, Australia, UAE and Canada and here are the results. 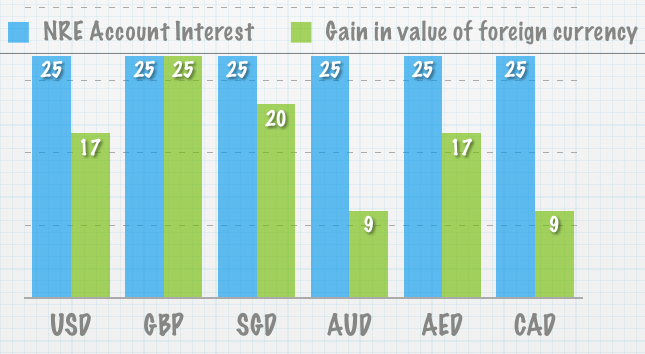 As you can see, only GBP has been able to keep up with the Indian interest rates, and the rest of them have been lagging behind, some considerably so.

I feel it is a function of the high domestic interest rates, and the fact that most of the global economies aren’t doing that great that has resulted in these numbers.

Will these results continue to hold up in the future? I’m going to say, probably yes because the interest rates are still high at about 9% right now, and that results in a gain of about 54% in 5 years , and I think the probability of the Rupee losing half its value against these currencies in the next five years is probably lower than that.

32 thoughts on “Should NRIs bother to invest in India?”