As on March 23rd the iShares Silver Trust (SLV) held 8,180.44 tonnes of silver. This stock of silver is stored at SLV’s custodian — JP Morgan Chase.

Some commodity funds not only hold the underlying commodity, but, on top of that — trade on the futures contracts of that commodity on exchanges like COMEX. SLV doesn’t do this. SLV takes delivery of physical silver, which complies with London Bullion Market Association (LBMA) silver delivery rules.

There are other silver fundsÂ  which take positions in silver by buying stock of silver mining companies. SLV doesn’t do that either.

This means that SLV is a passive investment vehicle and the price of the fund moves in tandem with silver prices. There are no fancy hedging or other active management techniques used by this silver ETF. The lack of active management means reduced expenses and fees.

Here is a look at how the SLV ETF moved since September 2008. There was a 10:1 split on 21st September, so I am not including the chart which includes prices before that date. 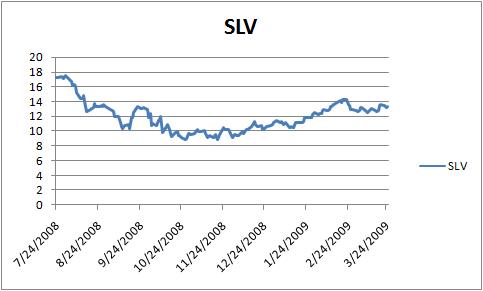 The gap between total demand and total supply is matched by:

While silver is generally thought of as a precious metal, its industrial use exceeds its use in jewelery and coins. Here is a break-up of 2007 silver usage segments: 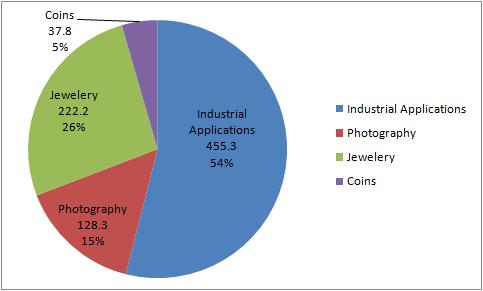 This chart shows that the demand for physical silver is likely to be more stable than other precious metals like gold, which have a large component of discretionary spending built into their demand.

Precious metals like gold and silver are getting increasingly popular because they are seen as effective hedges against stock market downturns. Like gold, silver is considered a good hedge against the stock market, as investors flock to safety in times of uncertainty.

The quantitative easing that the Fed is currently employing is expected to result in massive inflation and fall in the value of dollar. This is another reason precious metals like silver are gaining in popularity and seeing a rally.

The iShares Silver Trust (SLV) ETF is a good option for anyone who wants to invest in silver, but is not interested in holding huge quantities of physical silver. However, the prices of gold and silver have already gone up quite considerably and given the enormous interest in these metals lately — this may just be where the next bubble is forming.

Disclosure: At the time of writing I don’t hold any positions in SLV.