The big news today is that the government has freed petrol prices, and raised prices of kerosene, diesel, LPG, and cooking gas prices.

A panel of ministers increased prices of state-subsidised diesel, kerosene and cooking gas prices, which could help reduce the fiscal deficit from the projected 5.5 percent of 2010/11 GDP and free up revenues for other programmes.

The panel said petrol prices would be market driven, rising 3.50 rupees per litre, while kerosene prices would rise by 3 rupees a litre. While petrol is mainly used by the middle class for cars, kerosene is used by the poor for power.

Diesel prices will rise 2 rupees per litre and will be freed up in the future. Cooking gas prices were raised by 35 rupees a cylinder.

I looked up the Report of the Expert Group on a Viable and Sustainable System of Pricing of Petroleum Products on the Ministry of Petroleum website, and it had a very useful chart on page 11.

This table shows the indicative retail price of Petrol, Diesel, Kerosene and LPG at various levels of International prices at Delhi. 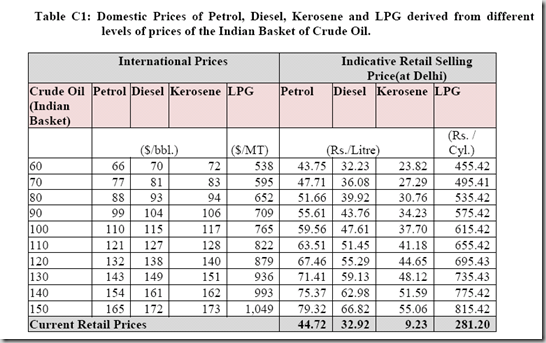 This table is like a guide or approximation to what you can expect at various price levels, so at $100 a barrel â€“ petrol is likely to cost around Rs. 60, and the current international price is about $77 a barrel.

No one likes a price rise, but at least this table will give you a sense of what to expect under different price levels. More importantly, it shows that if the oil price doubles from say $60 to $120 – the petrol price need not double to match it, which is what most people would probably think of when they hear about freeing up petrol prices.

One thought on “Petrol prices freed from government controls”