Last week I wrote a post about using formulas in Word, and reader Rajesh wrote to me telling me that the formulas donâ€™t auto â€“ update when you change the values. I hadnâ€™t noticed this before, so I tried it and found that you have to manually update the formulas, and this doesnâ€™t quite behave as it does in Excel.

The good news is that it isnâ€™tÂ  that hard to update a value, – you can just place your cursor on the cell with the formula, right click, and hit â€œUpdate Fieldâ€ if you have just one formula.

If you have more than one, then it will be easier to select the entire document using Ctrl + A, and hitting F9.

That will update all values in the Word document.

Thanks to Rajesh for pointing that out!

I am posting the rest of the earlier post (which describes how to enter a formula) below in case you havenâ€™t seen it. No need to read further if you have already seen that post.

I discovered a neat little feature in MS Word today which has been around for quite some time now, and can come quite handy if you have to perform calculations within a Word document, or create a template with calculations that others will use later on.

You can perform calculations in a MS Word table much in the same way you perform them in MS Excel. Say you have a table with Regions, and Sales like the one below. 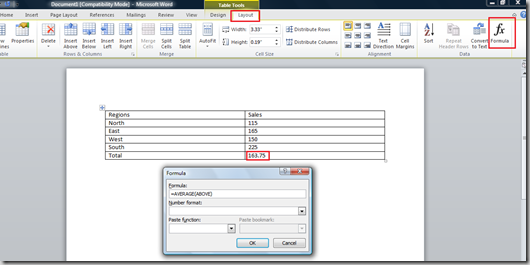 You can even reference the cells like B2, B3, B4 etc., and then perform more complex calculations too.

Here is an example: Say you have tele-densities from a few states, and want to see the difference between the maximum and minimum.

You can write a formula by referencing the cells like you do in Excel, and calculate the result. Here is how that would look like: 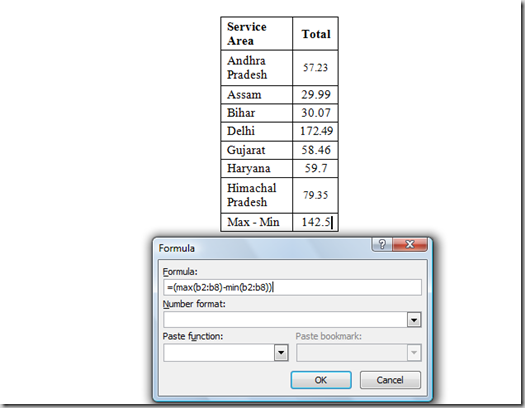 This works in MS Word 2007 and 2010, and can come quite handy if you have to do calculations for a report, or create a template or some other stuff that needs some light calculations.

3 thoughts on “How to update formulas in a Word document?”