When I wrote the post about LIC’s online term insurance yesterday, I said that I would myself opt for a much cheaper private insurer and that’s because all of them essentially offer the same thing.

The reason behind that a lot of the private life insurance companies are settling claims at a good rate, and while none of them come close to LIC’s claim settlement rates, they are not that far behind either.

This situation is quite different from the one we looked at about 3 years ago when I did a post on the claim settlement ratio of all life insurers in India. A quick look at that post shows that the LIC rejected a lot fewer claims than anyone else, and the difference was enough for me to say at that time that I would go for the more expensive LIC policy.

However, things have changed now as you can see from the chart below. (click to enlarge) 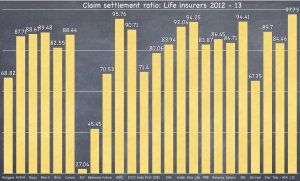 There are several players hovering at the 90% mark with a few that have crossed the 90% mark, and that should give you sufficient confidence that the claim will be paid.

However, this situation won’t even apply to a lot of people who are diligent about doing the forms themselves, and disclose everything upfront, or in other cases don’t have anything to disclose.

The second thing about this is the 2 year rule. If your policy has been in force for more than 2 years then the insurer can’t say that there is anything wrong with your form and deny your claim. For many private players their ratio of newer policy holders to existing policyholders must be relatively higher such that it probably affects their settlement ratio.

Either way, I think the situation has changed in the last few years, and it is worthwhile considering a private player with a good claim settlement ratio and an inexpensive plan.

Disclosure: I have a LIC term plan bought many years ago.