88% of India’s total labour force of 47.29 crore belongs to the unorganised sector, in which the workers do not have any formal provision of getting a regular pension payment on retirement. Moreover, due to increasing labour wages and better medical facilities, these people also face a risk of increasing longevity. So, this work force would require some kind of assured income guarantee to sustain itself in the coming years.

To encourage workers in the unorganised sector to voluntarily save for their retirement, the government of India will be launching a new scheme, called Atal Pension Yojana (APY), from 1st June, 2015. Finance Minister Arun Jaitley announced this scheme in his budget speech on February 28th.

This scheme will replace the UPA government’s Swavalamban Yojana – NPS Lite and will be administered by the Pension Fund Regulatory and Development Authority (PFRDA). The benefits of this scheme in terms of fixed pension will be guaranteed by the government and the government will also make contribution to these accounts on behalf of its subscribers.

The minimum age of joining this scheme is 18 years and maximum age is 40 years. Pension payment will start at the age of 60 years. Therefore, minimum period of contribution by the subscriber under APY would be 20 years or more.

The Central Government would also co-contribute 50% of the subscriber’s contribution or Rs. 1000 per annum, whichever is lower, to each eligible subscriber account, for a period of 5 years, i.e., from 2015-16 to 2019-20, who join the NPS before 31st December, 2015 and who are not income tax payers. The existing subscribers of Swavalamban Scheme would be automatically migrated to APY, unless they opt out.

Who is eligible for Atal Pension Yojana?

Any Citizen of India, aged between 18 years and 40 years, who has his/her savings bank account opened and also possesses a mobile number, would be eligible to subscribe to this scheme.

Government Funding – Indian Government would provide (i) fixed pension guarantee for the subscribers; (ii) would co-contribute 50% of the subscriber contribution or Rs. 1,000 per annum, whichever is lower, to eligible subscribers; and (iii) would also reimburse the promotional and development activities including incentive to the contribution collection agencies to encourage people to join the APY.

Who is eligible for Government Co-Contribution in Atal Pension Yojana?

Subscribers of this scheme, who are not covered under any other statutory social security scheme and are not income tax payers, would be eligible for the government’s co-contribution of up to Rs. 1,000 per annum.

Social Security Schemes which are not eligible for Government Co-Contribution 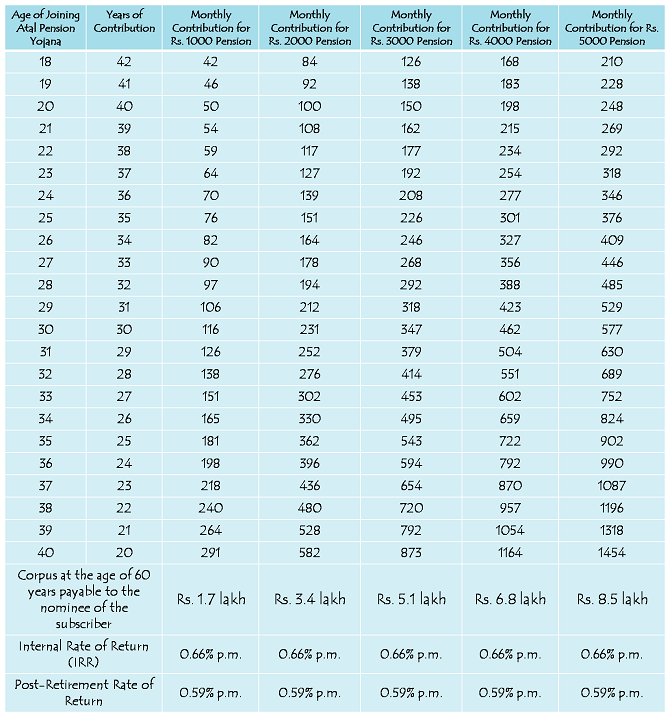 Internal Rate of Return (IRR) – Thanks to the government funding of Rs. 1,000 per annum per subscriber account for 5 years, your account would generate an IRR of approximately 0.66% per month or 8% per annum. This pension amount per month is fixed and the government has made it clear that if the actual returns on the pension contributions are higher than the assumed returns, such excess return will be credited to the subscribers’ accounts, resulting in enhanced pension payment to the subscribers.

Minimum Contribution – A subscriber aged 18 years will have to contribute a minimum of Rs. 42 per month in order to get Rs. 1,000 pension per month starting 60 years of age. For a 40 years old subscriber, his/her minimum contribution would be Rs. 291 per month. The contribution levels would vary and would be low if subscriber joins early and increase if he joins late.

Maximum Contribution – A subscriber aged 40 years will have to contribute Rs. 1,454 per month in order to get Rs. 5,000 pension per month starting 60 years of age. For a 18 years old subscriber, his/her contribution for Rs. 5,000 monthly pension would be Rs. 210 per month.

Can I increase or decrease my monthly contribution for higher or lower pension amount?

The subscribers can opt to decrease or increase pension amount during the course of accumulation phase, as per the available monthly pension amounts. However, the switching option shall be provided only once in a year during the month of April.

What will happen if sufficient amount is not maintained in the savings bank account for contribution on the due date?

Non-maintenance of required balance in the savings bank account for contribution on the specified date will be considered as default. Banks are required to collect additional amount for delayed payments, such amount will vary from minimum Re. 1 to Rs. 10 per month as shown below:

Discontinuation of payments of contribution amount shall lead to following:

Subscriber should ensure that the Bank account to be funded enough for auto debit of contribution amount. The fixed amount of interest/penalty will remain as part of the pension corpus of the subscriber.

Post-Retirement Rate of Return – Considering a retirement corpus of Rs. 1.7 lakh and monthly pension of Rs. 1,000, this scheme is going to generate a return of 0.59% per month or 7.1% per annum for its subscribers. I think this return is also on a lower side.

Where to open APY Accounts – You need to approach points of presence (PoPs) and aggregators under existing Swavalamban Scheme. These agencies would enrol you through architecture of National Pension System (NPS).

I think a subscriber should opt for a minimum monthly contribution of around Rs. 167 or so, which would make it approximately Rs. 2,000 annual contribution. 50% of Rs. 2,000 i.e. Rs. 1,000 would be contributed by the government as well. So, the subscriber will get the maximum benefit of government funding.

As mentioned above, the scheme would start from June 1, 2015. So, interested people will have to wait till then to open an account. If you have any other query regarding this scheme, please share it here.