The Indian Prime Minister – Dr. Manmohan Singh, said last week that India can consider contributing to the IMF, based on its quota. India has come a long way since the 1991 crisis, when it had to go to the IMF because, basically — it had run out of money.

The liberalization process thatÂ  started around that time combined with the giant leaps the Indian IT sector made — ensured that India is in a reasonable position in the worst recession since the second world war. India has forex reserves of about $250 billion dollars and that acts as a cushion against the current downturn.

I was interested to see what India’s quota in IMF is, and how much it could contribute. IMF Quotas are assigned to each country based on their relative size to the global economy. The IMF Quota of a country decides its voting power in IMF. The US has the highest quota of about 16.77% and Palau has the lowest quote of 0.01%.

IMQ Quotas Of The Biggest Countries

I was interested to see a comparison of GDPs of big countries and their respective quotas. GDP figures are nominal GDP as a percentage of the global economy and IMF Quotas are based on the latest allocations available at the IMF website. 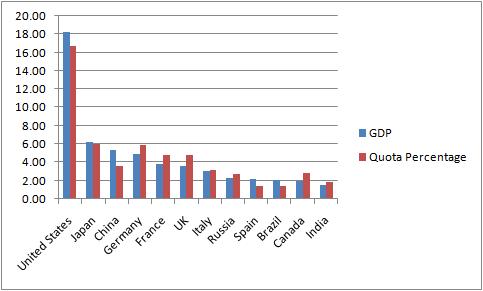 This comparison would look quite different if instead of nominal GDPs — PPP (Purchasing Price Parity) GDP,Â  Debt to GDP Ratio or Forex Reserves was used.

It will be interesting to see how this ratio evolves over time and which countries emerge strongest, once the recession ends.