Much like any other bubble, Japan’s real estate bubble also burst in the 90’s and the economy went into a downward spiral. In an effort to save the economy from a crash landing and revive it, Japan lowered interest rates to 0% and funded bailout packages, one after the other.

In fact as late as 1999, Japan’s central banks were loaning out money to banks and other companies which were clearly not in a position to repay those loans.

The government bail-outs kept dead banks technically alive, but, they never recovered back to the point where they were really functional.

This gave birth to the term – Zombie Banks. The banks that received the funds were neither dead nor alive. The government pumped in money and the banks were not allowed to go bankrupt or die, but the general state of the economy never allowed them to work like an active bank.

Japan wanted to avoid a crash-landing and it did, but they paid a price in the bargain – a long period of stagnation. 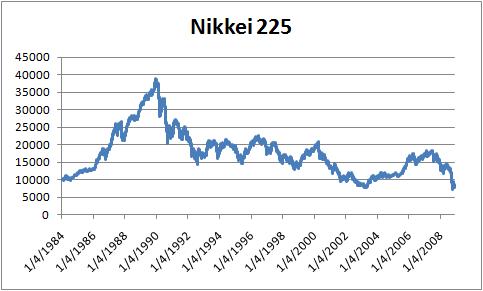 Its almost 18 years since the bubble bust, and Japan’s stock market is about 20% of its peaks.

To put things in perspective, for the US, this kind of situation would mean that the Dow Jones is about 2800 in the year 2026!

Eventually the government gave up its plans on keeping the zombie institutions alive and adopted a more market oriented approach.

There are eerie similarities between the current US situation and Japan of 18 years ago, both, in the way the bubble was formed and the response of policy makers.

Do you think the US is headed in the same direction?