Here are the puzzles shared on OneMint’s Facebook page for this week.

1. “You will be glad to know that two of your brothers are getting married in the same month,” my uncle told me.

What are the two wedding dates?

2. The names of three countries are hidden below. How many can you spot?

Though Iâ€™ve seen the ranger many times, Iâ€™ve never had the courage to ask him what was on my mind till now.
Finally, I pointed to a spot not 10 feet away and I asked him â€œIs that a lionâ€™s den?â€ â€œMarks such as those are only made by bears, so you donâ€™t have to worryâ€ he told me.

Seeing the worried look on my face, he said â€œDonâ€™t worry, they can adapt pretty well living close to humans.â€

That should be easy to figure out, I’ll just ask them!”, you say.

Which one of you tells the truth?
Viru: I do
Gautam: Me too.

Which one of you lies?

Viru: Not me.
Gautam: Me neither.

Do either of you ever tell a lie?

What can you tell me about them?

I may be only half the size of Washington DC, but I have something they don’t.

Who or what has signed this note, and what do they have that Washington doesn’t?

5. Which number comes next in this series?

6. Which number is next in series? 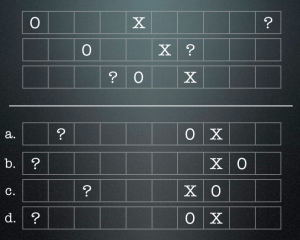 The interesting thing about this week’s puzzles is that it is the first time that one question remains unanswered on the OneMint Facebook page – that’s number 4 in this post.