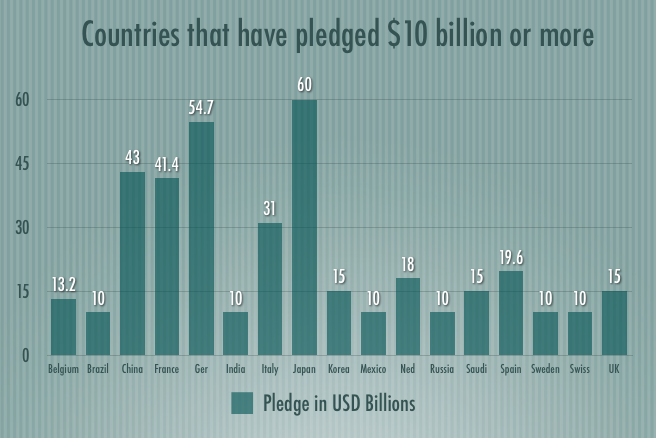 It’s not often that I discover breaking news through my Facebook feed, but that happened today with the news of India’s $10 billion pledge to IMF going viral and people taking some pretty extreme positions in the comments to each other’s posts.

The press release from IMF about this is fairly detailed and let me present two quotes from Ms. LagardeÂ  that I think are the most important to consider when you’re trying to figure out what to make of this news.

Here is the first quote (emphasis mine):

â€œWe warmly welcome pledges by our members to increase IMF resources by over $430Â billion, almost doubling our lending capacity. This signals the strong resolve of the international community to secure global financial stability and put the world economic recovery on a sounder footing. These resources are being made available for crisis prevention and resolution and to meet the potential financing needs of all IMF members. They will be drawn only if they are needed, and if drawn, will be refunded with interest.

So, you see, the impression that some people have got (and I was part of this group initially) that India is just giving away $10 billion is wrong. It is an interest bearing loan, and is not a donation at all.

I think the problem is that most newspapers reported this as “aid” and that word usually connotes some kind of donation or charity, but as you can see this is not aid in the same sense that most people think about it. You don’t expect to be paid back with interest if you donate money to charity.

Now, to the second quote (emphasis mine).

â€œThese resources are being made available for crisis prevention and resolution and to meet the potential financing needs of all IMF members. They will be drawn only if they are needed as a second line of defense after resources already available from quota and the existing New Arrangements to Borrow are substantially used. If drawn, they will be repaid with interest. The IMF is committed to assuring our membersâ€™ interests and resources are safeguarded.â€

This means that they have to first use up money from the quota and something called the “New Arrangement to Borrow” and only then can they go to this additional funding.

India is part of the quota but is it part of the new arrangement to borrow? Those details are present in this page, and you will be surprised to learn that India’s name figures there and the number is not small either at $8.74 billion. If you’re worried about the $10 billion, you should be more worried about this $8.74 billion because this will get used up prior to the 10 billion.

I think looking at these two quotes help a great deal in getting a clear picture on the announcement that’s made today.

Almost 3 years ago, Dr. Manmohan Singh had said that India is ready to contribute to IMF based on its quota (I had blogged about it then) and this is an extension of that to the extent that India wants to have a greater say in the workings of the IMF along with other emerging economies and these type of steps will help it get that larger say. India’s current voting right is 2.34% and that’s up from the 1.89% that it had 3 years ago.

It is also notable that India is not alone in pledging this money, and here is a chart that shows other countries who have pledged as much or more than India in order to boost IMF’s resources. (Data Source)

It’s only natural then that India plays its part to support the IMF today when the world is even more inter-connected, especially when it is in the form of loans that will eventually be repaid along with interest.

16 thoughts on “India’s $10 billion pledge to IMF: Facts and Fiction”