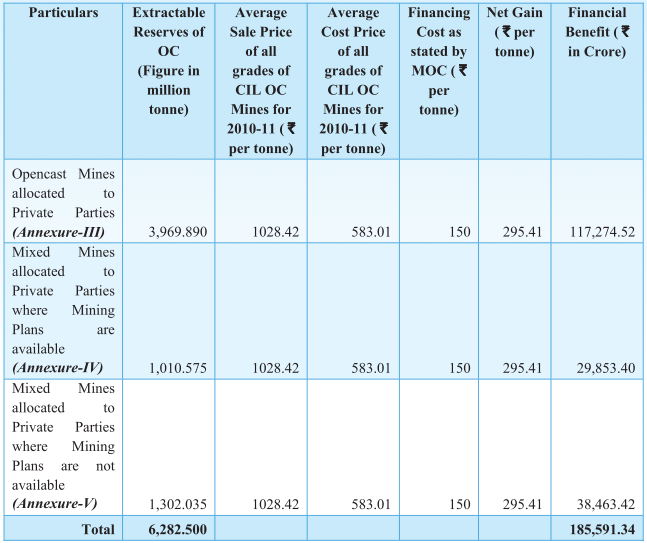 CAG’s report on coal allocation was the big news last week, and the figure of Rs. 1.86 lakhs got a lot of attention as you would have expected it to.

It has now become a regular feature of CAG reports to have a massive number which represents the loss to exchequer and I was curious to see how they arrived at the number for this report.

The full report is available at this link, and the calculation that leads to the notional loss is present in chapter 4 of the report which can be downloaded separately from that page.

I think the report does a good job in explaining how it reaches the number, and even someone like me who doesn’t know anything about coal allocation can get a fair idea of what they have done to arrive at the number.

First some history, before 1993 there was no specific criteria for allocation of coal blocks, and coal blocks were allocated based on the recommendation of the State Governments.

In 2004, the government came up with the concept of competitive bidding that was supposed to replace the screening committee and was a method that could be “not only objective but demonstrably transparent”.

The CAG report then has a detailed timeline which shows what transpired between June 28, 2004 and February 2, 2012 and how adopting the competitive bidding process kept getting delayed in these 7 years.

According to CAG, the competitive bidding process could have been adopted in 2004, and had they adopted it in 2004 in place of the screening committee process, the government would have got higher bids for coal blocks and that’s how the loss in revenue is calculated.

So, that’s the first part of the loss in revenue calculation. There were 142 coal blocks that were auctioned since June 2004, and CAG has used these to calculate the loss in notional revenue.

Here is a table from the report that shows the break – up of these coal blocks.

They have broken down the number of coal blocks into Opencast / Mixed Mines and Under Ground mines, and further they have broken it down to whether it was allocated to a private party or a government party.

For calculation of loss to the government, they have considered only the coal blocks allotted to the private parties so out of 142 coal blocks out of the 67 coal blocks get excluded there.

Further, the report says that underground mines are mostly loss making, so they have excluded underground mines from this calculation. That leaves 57 mines and within those 57 mines, only the Opencast part of the mines is considered in the CAG report.

That leaves us with 57 coal blocks – and the next thing that the CAG has done is to see how much Geological Reserve each coal block contains based on the Mine Plan or other official sources.

It seems that the Mine Plan also has the Extractable Resource and wherever available, CAG has used that number, and when it was not available they have assumed that extractable reserves are 73% of geological reserve which they say is a conservative norm.

Based on this, they calculated the extractable reserves in each of these coal blocks.

Next, they have added financing charge of Rs. 150 per ton on the cost, and this is from a number by the MOC.

So, you have the total reserves, and the cost. The last piece of the calculation is the sale price, and again, they took the average basis of all grades of coal produced in open cast mines of Coal India Limited for the year 2010 – 11 per their final cost sheet.

They have tabulated these results in the report as follows.

I learned more about this issue by reading these few pages of the CAG report along with the executive summary than I did reading most news reports and it gave me a good understanding of how the CAG has reported losses and you may or may not agree with their methodology, but you have to give them full marks for transparency.