A few days ago Mr. Ramamurthy posted an interesting comment which didn’t actually talk about black money, but I believe that’s what he meant and indeed that’s what a lot of people mean when they talk about corruption in this context.

Lot of talk is going on with corruption in India.Corruption is of 2 kinds.Major and Minor.Major is the corrupt money earned by the politicians etc running into several crores which normally is kept in foreign banks.The minor is in smaller sums small time officials receive money for favours rendered.
What happens to the money received and what are the consequent effects on the Indian economy?.I feel the Major corruption money which gets transferred to foreign countries and which do NOT come back to india is a loss to Indian economy.What remains in India is not a loss.It just means a mere transfer of Indian rupees from one pocket to another.Am I right?
Please dont assume I am advocating corruption. It is very bad as the consequences need not be always economical.

Although there is no set definition of black money, I think it’s fair to say that when you talk about black money, you’re usually referring to either money that’s earned doing something illegal like smuggling or stealing or you’re talking about money on which you haven’t paid taxes.

We will not talk about the first type of black money in this post because that’s a criminal activity and at least for this post, I think it will be simpler to just think about the money on which taxes haven’t been paid.

Before I go any further, I’ll refer to the budget post that I wrote earlier this year, and specifically to the chart that showed how the government raises money to run the country. 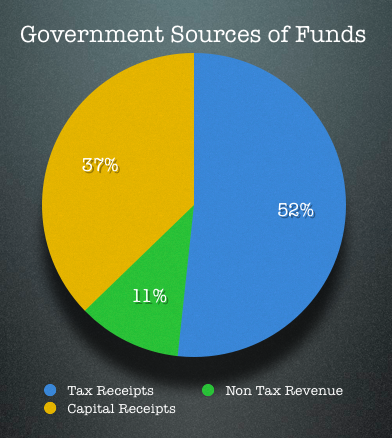 When someone evades taxes then government revenues decline and this in turn adds to the already massive deficit that the Indian government has.

To finance this deficit, the government has to borrow more money which is one cause of inflation and high prices, so you can say that black money causes strains on the government finances which in turn affects the common in the form of high prices. So, to that extent I feel that even the black money that is not transferred out of India is not merely a transfer and does affect the economy negatively.

If the black money is just lying stashed away in trunks and mattresses then that’s no good, but if people spend it then that stimulates the economy.

If the money gets spent then that works to stimulate the economy and though not as good as trade done in white money is still better than the money not getting spent at all.

7 thoughts on “Effects of black money on Indian economy”