Two power sector companies are inviting your applications for their tax-free bonds – PFC 8.92% bond issue is already open, the issue size is Rs. 3,875.90 crore and has received an extremely good response from the investors by getting subscribed to the tune of Rs. 2,639.30 crore in just two days time. NHPC is entering the field for a competitive fight from October 18th with a smaller issue size of Rs. 1,000 crore.

With interest rates exactly the same, both being PSUs and with features so similar, it becomes extremely difficult to make a choice based on just the features of these two issues. So, I thought of doing a fundamental comparative analysis between the two companies.

PFC got incorporated in 1986 as a financial institution to finance, facilitate and promote India’s power sector development. It is a Central Public Sector Enterprise (CPSE) and got declared a Mini-Ratna enterprise in 1988 and entitled Navratna status in 2007.

NHPC got established in 1975 to execute all aspects of hydroelectric power project development, from concept to commissioning. It was declared a Mini-Ratna Category-I CPSE in 2008 and has recently sought Navratna status from the government.

To be eligible for ‘Navratna’ status, a company needs to have a score of 60 out of 100, based on certain parameters which include net profit, net worth, total manpower cost, total cost of production, cost of services, Profit Before Depreciation, Interest and Taxes (PBDIT), capital employed etc.

As a Mini-Ratna Category-I entity, NHPC has been granted autonomy to undertake new projects. NHPC has developed and constructed 17 hydroelectric power stations and has current total generating capacity of 5,676.2 MW which is approximately 14.4% of the total hydel generating capacity in India.

It has power stations and hydroelectric projects located predominantly in the North and North East of India, in the states of Jammu & Kashmir, Himachal Pradesh, Uttrakhand, Arunachal Pradesh, Assam, Manipur, Sikkim. and West Bengal.

NHPC has also been assigned “BBB-” rating by Fitch. S&P had also given “BBB-” rating to NHPC and removed it from ‘CreditWatch’ in September 2009, based on its assessment of NHPC’s “very strong” link with the government. S&P expressed its opinion that “there is a high likelihood that the government of India would provide extraordinary support for the company in the event of any financial distress”.

Financials & other factors to consider 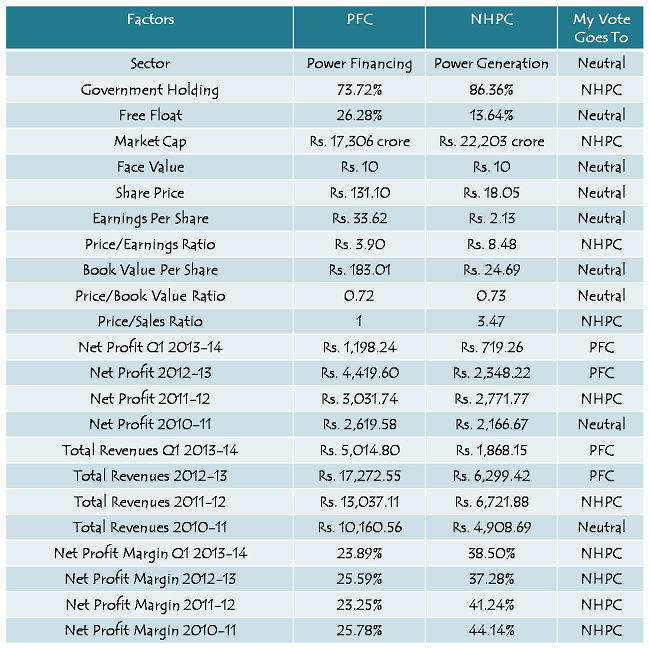 PFC’s P/E Ratio of 3.90X is too low and it makes me feel that the market either believes PFC’s earnings to decline considerably at some point in future or some of the borrowers to default on their loan/interest payments.

I am not a power sector expert. But, as a retail investor, I think NHPC is a better company to invest your money in the power sector. As a common consumer of electricity, this is what I understand – I buy electricity from a private power distribution company in Delhi, which in turn buys it from a power generation company like NHPC etc. Power generation business is a capital intensive business, for which companies like NHPC get capital infusion from the governments, loans from the power financiers like PFC, REC etc. and carry internal accruals by generating profits.

For NHPC, it is better to take money directly from us, the retail investors, rather than we giving money to PFC and then PFC lending it to NHPC at a higher rate. PFC’s fortunes hinge on the power producers like NHPC. If power producers are doing well, PFC would do better, but, if they are not doing good, PFC cannot do anything about it. This relationship is somewhat similar to real estate developers and project finance companies.

The fortunes of these power producers also depend on its cost of the factors of production, like labour, raw materials, technology, machinery etc. Most power plants here in India are coal-based, for whom it becomes a problem if coal supply gets interrupted or they have to import expensive coal due to its scarcity or falling value of rupee. For NHPC, the raw material cost is minimal.

My views might reflect very basic understanding because I don’t know how exactly things get carried out. I could have done some deep research on the functionalities & technicalities of the power sector companies, but then it would have become too complicated for me as well you to understand. So, personally & marginally, I prefer NHPC tax-free bonds over PFC tax-free bonds. Which one is your preference? Please share it share.