With rising inflation and high fiscal deficit here in India, yields on government securities are also rising and high G-Sec yields bring along some good investment opportunities for the prospective tax-free bond investors. Many of the investors, who could not invest in the previous five tax-free bond issues of REC, HUDCO, IIFCL, PFC and NHPC, have been eagerly waiting for the new issues to get launched.

A few days back Ramadas asked me if I know when the next tax free bond issue will hit the market. Here is what he had to say:

I have received many such queries in the past 15-20 days as many people have been asking this question on different posts.

As none of the companies has filed the final prospectus for its issue, nobody knows the exact opening dates of the upcoming tax free bond issues. But, with whatever information I have and based on the dates of filing of their draft shelf prospectus, here is the list of tax free bond issues which are going to hit the streets in the next one month or so.

IIFCL Issue – Last week of November – IIFCL announced earlier this month that it would launch the second tranche of its tax free bonds in the third or the fourth week of November. IIFCL has already raised around Rs. 4,200 crore out of Rs. 10,000 crore it has been allowed to raise from tax-free bonds this financial year.

HUDCO Issue – Last week of November – I have been told by a close associate that HUDCO is also planning to launch the second tranche of its tax-free bonds issue in the next 3-5 days time. The company could raise around Rs. 2,400 crore in the first tranche which got closed on October 14. HUDCO still has the authority to raise another Rs. 2,400 crore.

Also, as Shashwat shared it yesterday, an official of IRFC has told Deccan Herald that it is planning to launch its public issue in December. Taking a cue from it, I think IRFC issue should hit the streets in the first week of December. 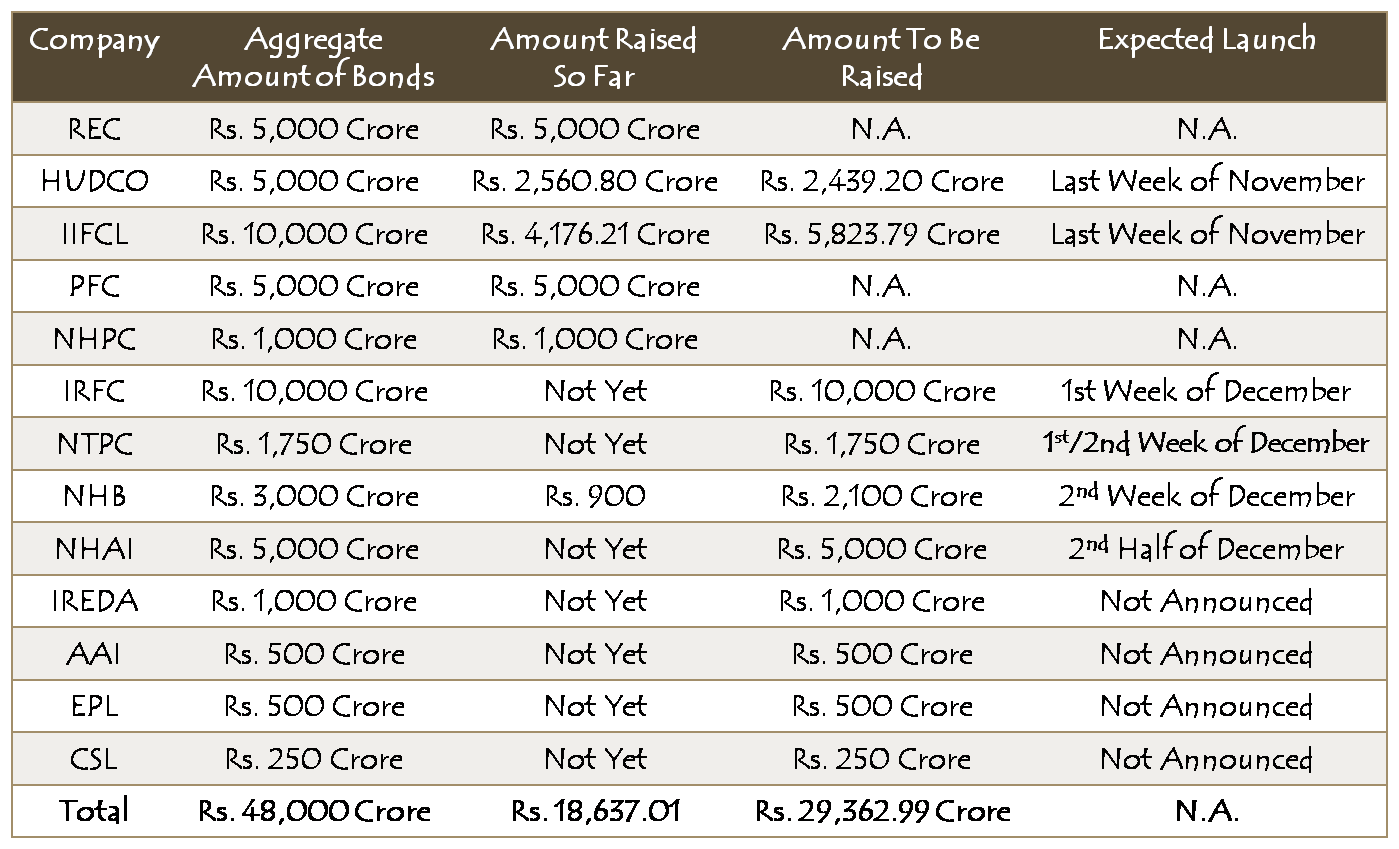 NTPC Issue – First week of December – Just a few days after IRFC did it, NTPC also filed the draft shelf prospectus on November 15 to raise Rs. 1,750 crore from tax-free bonds. So, I expect NTPC issue also to hit either in the first week or the second week of December.

NHB Issue – Second week of December – Though NHB raised Rs. 900 crore from these bonds through private placement in August this year, it has taken more than usual time to do it through its public issue. But, now they have officially announced to launch its issue in the second week of December. I hope they do not delay it further.

November was a dry month as far as tax free bond issues are concerned. But, if all these issues get launched sometime next month, it would really create a glut for these bonds in the market.

Thanks to the high interest rates scenario, these companies would find it less difficult to attract investors’ money to get invested in these bonds.

I’ll update this post as and when I have any information about any new issue getting launched and the coupon rates it is going to carry. If any of you get any kind of information, please share it here so that all of us benefit out of it.