Financials of GIC Re 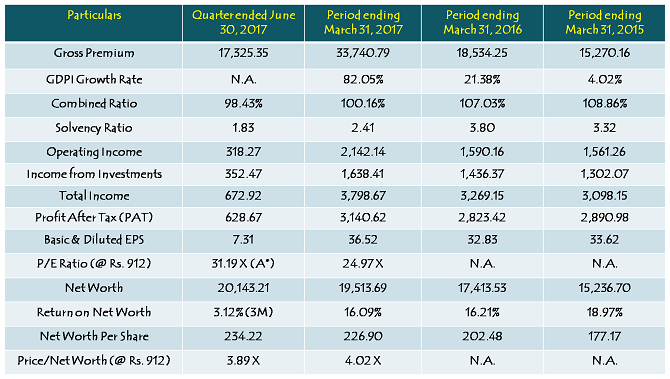 Combined Ratio – This is the measure of profitability which is used to indicate how well underwriting operations are performing. The combined ratio is calculated by taking a percentage of claims incurred (net) divided by premiums earned (net) plus percentage of expenses of management and net commission and then dividing the quotient by net premium. A ratio below 100% indicates that the company is making underwriting income/profits, while a ratio above 100% means that the company is paying out more money than it is receiving from premiums.

Solvency Ratio – This is a regulatory measure of capital adequacy, calculated by dividing available solvency margin by required solvency margin, each as calculated in accordance with the guidelines of the IRDAI on a standalone restated basis. The IRDAI has set a minimum solvency ratio of 1.50.

Should You Invest or Not in GIC IPO?

The company reported an EPS of Rs. 36.52 a share as on March 31, 2017 and a net worth of Rs. 234.22 a share as on June 30, 2017, which gives it a multiple of 24.97 times its EPS and 3.89 times its book value. These multiples seem reasonably fair to me as per the current market sentiment. Moreover, recently listed insurance companies, SBI Life, ICICI Lombard and ICICI Prudential, all are trading at multiples higher than that of GIC, but then they are growing at a faster pace as compared to GIC and their growth is relatively consistent as well. So, the premium with which other listed insurance companies are trading relative to GIC seem justified to me.

Finally, investing in this IPO depends on two things – one, what kind of investor you are and two, what is your investment objective with this IPO. I mean if you usually invest in IPOs for making quick listing gains and exit out immediately post listing, then I think this IPO is not for you. I think even in a buoyant market sentiment as it is there in the markets these days, I don’t think GIC should have listing gains of more than 8-10% in this IPO. I think GIC is fairly valued in this price band of Rs. 855-912 and it should consolidate here in the price range of Rs. 800-1000 in the short-term, and should break out of this range only when the company shows some real improvement in its core operating income and profitability.

I think Rs. 45 a share discount is key here and provides a much required margin of safety for the retail investors. Probably in its absence, I would have definitely avoided this IPO. But, its presence has put me in two minds. Still I would skip this IPO and wait for better opportunities to invest in GIC post listing, or pick better companies relatively.