In the past month I’ve received at least three emails about how you could time the market, or what strategy you could follow in down markets.

The events unfolding in Japan are a great example of why I say that. The Nikkei was down about 10% yesterday, and 6% the day before that.

The market is reacting to news in real-time, and there is panic and fear all around. I don’t know if Indian investors have a way to buy Japanese equities, but would you really have the courage to buy Japanese stocks in such an environment?

The news that’s coming out of Japan is really bad, and you might think this is an exception, but don’t forget that when Lehman collapsed in late 2008 – people were talking about the whole financial system coming to the edge of a collapse, and that looked like a pretty scary event too.

9/11 was very scary as well, and buying stocks was the last thing on anyone’s mind then.

The markets don’t move in a linear manner, and what I’ve seen over the years is that people make a buck here, another there, and then there is a huge fall that wipes out all their earnings in the previous years. I’ve even illustrated it by showing annual nifty returns, and how one bad year jolted everyone.The fact that we had spectacular gains in 2009 is no solace for people who lost money in 2008, and cashed out.

If you are playing the market for the short run, or are not sufficiently diversified I think you will make gains for a few years, but ultimately all of that will be lost in one fell swoop and you will be left in much pain. 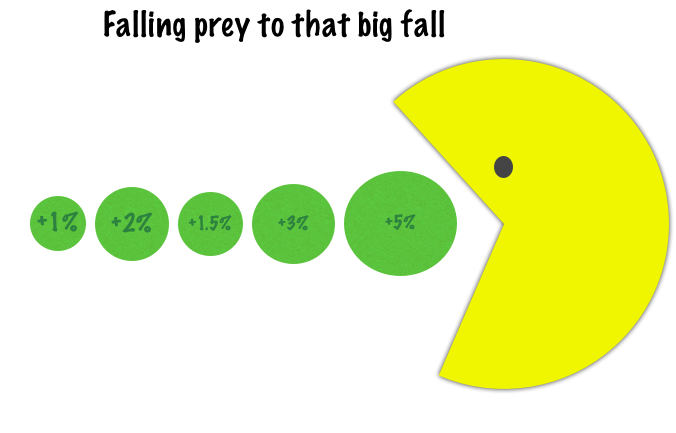 On the other hand if you are diversified and are getting into the market with small sums then you might be able to withstand the big crash when it comes and even continue to invest through it.

Hindsight is 20 – 20, but events in real time make it very difficult to know what to do at that point in time. We don’t know today whether Japan will come out of this alright, or will their infrastructure be hampered for years to come, or if they will come out stronger from this tragedy the way they did after the war.

There is just no way of knowing that and of course there is absolutely no way of knowing when such a big fall will happen as well. And for that reason I’d recommend you to think about diversification and systematic investing seriously.