US economy is recovering fast and probably faster than most of the analysts had expected a few months back. Earlier these analysts had a view that though the US economy is recovering, the recovery would be fragile till the time the employment situation improves. The US Bureau of Labor Statistics on friday released the Non-Farm Payroll numbers and the numbers were extremely good. After adding 195,000 jobs in May, this number got released at 195,000 again for June. So, is the US economic growth back on track and if yes, why is it bad for the emerging markets including India?

The immediate effect of this strong uptick in the US jobs growth is that the US Dollar has further strengthened and US bond yields have risen substantially in an anticipation of a further strengthening of US growth in the near future. The 10-year US treasury bond yield jumped 9.42% on friday itself, from 2.50% to 2.74%. This is a very steep rise in a single day. If we look at the yield movement since May 1, 2013, it has risen from 1.62% to 2.74%, a rapid jump of 68% in just over two months. 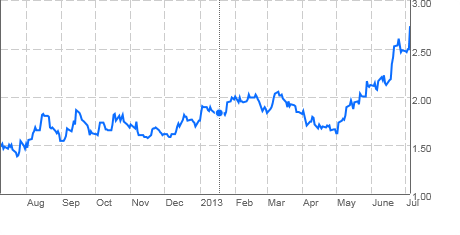 Earlier in June, the US Federal Reserve announced its intention to start tapering quantitative easing (QE) and thereby cut back on its unprecedented asset purchases. This mere announcement of a possible gradual withdrawal of quantitative easing sent all the major international financial markets into a tizzy, as it made the institutional investors sell their holdings quite heavily in almost all the markets, especially in emerging markets like India, massively increase their cash holdings and rethink their investment strategies and asset allocation region-wise.

Foreign Institutional Investors (FIIs), who had pumped in a huge amount of money into the Indian markets till May 2013 this year, pulled out heavily from the Indian debt markets and equity markets in June, to the tune of $5.68 billion and $1.85 billion respectively. This huge pullout by FIIs, good prospects of US economic growth, strengthening of USD, no relief from the bad GDP growth numbers & deficit numbers here in India etc., all have resulted in a steep fall in the value of Indian rupee and hardening of bond yields.

After hitting a low of 7.09% immediately after its auction in May, the 10-year 7.16% benchmark govt. bond yield has risen quite swiftly to 7.49% by friday. With the US non-farm payroll numbers announced on friday, the yield is expected to rise further here in monday’s trading. Similarly, the rupee is expected to cross 61 level mark against the US dollar on monday.

With the yields moving higher and the rupee getting weaker, the case for the RBI to cut interest rates has got very weak. So much weak that some of the analysts have started issuing reports predicting the inflation to take a U-turn once again and the RBI to raise its policy rates to stem the rupee fall and contain prices of imported goods. It is again going to put a lot of pressure on some of the struggling debt-heavy manufacturing companies.

So, at a time when Indian economy badly requires foreign money inflows to bridge their current account deficit and to strengthen the falling Indian currency, there is a big threat that the FIIs are thinking otherwise. FIIs are ready to move their money back to the US debt and equity markets at the slightest of signs of US growth getting stronger and Indian growth not moving out of the mire.

So, what should the Indian investors do in the current situation? – I think the declining trend in India’s economic fundamentals should take a U-turn very soon, probably in the next few days or few weeks. Indian govt bond yields, which had fallen down quite sharply in May, have risen with a similar intensity in June and should top out sometime this week from a short-term perspective. The investors, who are sitting on the sidelines to invest in the gilt funds or income funds to make money due to interest rate fall, should put a certain percentage of their investible surplus into these funds sometime this week itself.

Though not easily visible, some of the Indian economic fundamentals have also started improving. As the US growth returning back to some normal levels is a good news for the global economies including Indian economy in the long-term, I expect the equity markets also to do well from medium-term to long-term perspective. The investors are advised to go stock specific and do a thorough research before committing their hard-earned money to any of the stocks. Probably I am sounding too optimistic on the Indian markets than the actual picture at the ground level, but only the investors, who invest in markets in advance before they actually make a turnaround, make good money in these markets.

20 thoughts on “Why Good News for US Economy is a Bad News for Indian Economy, Indian Rupee & Indian Markets?”