India has seen an unprecedented fall in the value of its currency against the widely used global currency US dollar in the last couple of months. Analysts, experts, finance ministry, RBI, all are blaming high current account deficit (CAD) for the rupee fall.

To save the value of rupee somewhat by squeezing its supply and increasing the supply of dollar, the Reserve Bank of India (RBI) sometimes sell dollars in the open market. This action of RBI reduces our forex reserves and thus becomes one of the factors for such a reduction.

On September 3rd, Mr. Ramamurthy asked me how the RBI or the Government has raised these reserves over all these years, despite we having a higher import figures against the export numbers, thus always resulting in current account deficit (CAD) and never a current account surplus.

RBI or Govt is supposed to be having a Dollar reserve.I dont know the exact amount.

But I would like to know how RBI have accumulated this amount? I thought India never had a favourable CAD respect of Dollars.Imports were always in excess of exports.

Let us understand it, we spend dollars on our imports and get dollars for our exports. Actually, current account deficit (or total imports > total exports) is just a part of our overall foreign exchange standing. There are many other sources which affect our forex reserves either positively or negatively.

India’s foreign exchange reserves as on September 11, 1998 were at $29.048 billion, which on August 30th, 2013 stand at $275.49 billion, a jump of $246.442 billion or approximately 848% in 15 years’ time. RBI releases this figure every Friday, for the reserves held on the preceding Friday. If any of you wants to have the week-wise data of India’s historical forex reserves, you can visit this page of RBI to check it.

On July 27, 2013, the RBI released India’s Balance of Payments (BoP) data for financial year 2012-13. Here is the RBI’s Press Release regarding that. It lists the “Sources of Variation in Foreign Exchange Reserves” and I will try to explain these sources in a simple language to the best of my abilities. 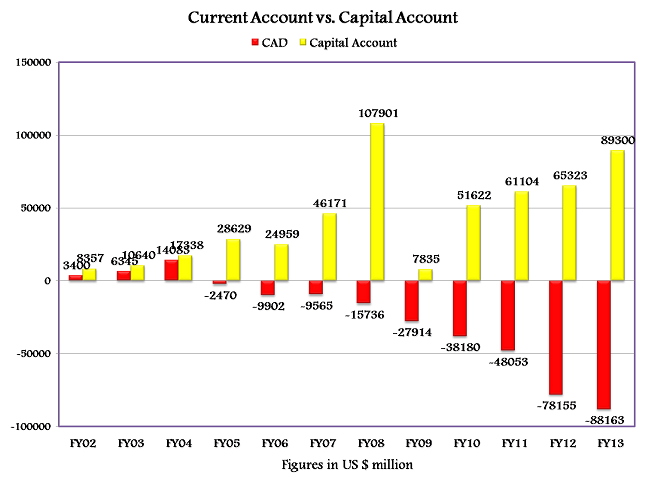 II. Capital Account (net) (= $92 billion) – To finance a country’s current account deficit, it is very important for the government to encourage international capital flows into the country. All the foreign money which flows into India or Indian money which flows to some other countries, in the form of capital investments, gets counted under capital account. What are the sources of India’s capital account? Here we have it:

(i) Foreign Direct Investment (FDI) (= $19.8 billion) – FDI refers to an investment made by a foreign entity into India that involves establishing operations or acquiring tangible assets, including stakes in other businesses. Here, the investor seeks to control, manage or have significant influence over its Indian operations, either by establishing its own subsidiary or entering into a joint venture with an Indian entity.

(ii) Portfolio Investment (= $26.9 billion) – This refers to a passive investment by a foreign investor in Indian securities such as stocks, bonds or other financial assets, none of which entails control, active management or significant influence of the issuer by the investor.

ADRs/GDRs – Foreign investors can also invest in an Indian company through the purchase of American Depository Receipts (ADRs) or Global Depository Receipts (GDRs). ADRs or GDRs are essentially negotiable instruments, denominated in US dollar or any other currency, representing a publicly-traded issuer’s local currency equity shares.

d. Short-Term Trade Credit (= $21.7 billion) – It refers to either suppliers’ credit, extended by the overseas suppliers, or buyers’ credit, arranged by the importers themselves from a foreign bank or financial institution, for imports into India. Short-term credit has a maturity period of less than 3 years. If the maturity period is more than 3 years, then it comes under ECBs.

f. Other Items in Capital Account (= -$2.4 billion) – These are miscellaneous items of capital account, whose value is not of any major significance.

As India has grown at a rapid pace in the past and is expected to maintain this growth chart in the coming couple of decades, foreign investors have been pouring money here to reap the benefits of this growth and that is how India has enjoyed a major uptick in its foreign exchange reserves. To maintain the value of rupee and thereby our forex reserves, India is required to become innovative, competitive and efficient. It is required to win foreign investors’ trust and thereby become a reliable partner in its future growth.