These two factors alone, created such conditions that the price of the dollar kept rising steadily.Â A look at the five year chart of US Dollar vs Euro, shows how sudden the spike of the dollar has been. 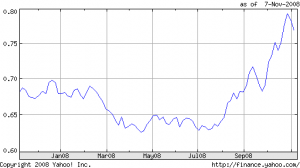 Will this rise continue?

The main factors that have led to the rise of the dollar are short-term in nature and have nothing to do with the fundamental strength of the US Economy (the underlying economy of the dollar).

This means that when hedge funds have sufficiently deleveraged and the flight to safety has stopped, the rise of the dollar will also halt.

Will the dollar collapse?

The value of the dollar in real-terms is declining due to two factors.

These two factors make me feel that the value of US Dollar is going to go down substantially in the years to come when we compare it to the highs that it stands at, today.

The other side of the story is that most emerging and developed nations hold their forex reserves in US Dollars. Japan has over a trillion US Dollars, China about half a trillion and India, one quarter of a trillion. This is representative of the forex reserves of the whole world. Therefore it is in the interest of the world at large to prop up the dollar and any time the dollar takes a big beating, these economies will come to rescue it.

The emerging economies have also grown quickly based on export earnings and a loss of those earnings will mean large scale joblessness.

All these factors make the dollar collapse a little hard to imagine.