The recent full page advertisement in ET about the fixed deposit scheme launch by geetanjali jewellers looked interesting. THe interest rate offered was 11.5 %. I was looking for CRISIL rating or any such type but could not get.

My question is what could be the reason for such a way of raising money, is it something like an NBFC and how reliable could this be.

The company does not allow premature withdrawal during first 6 months from the date of deposit. The terms of the deposit also states “Request for premature withdrawal may be permitted after 6 months with specific reason at the sole discretion of the Company only and cannot be claimed as a matter of right by the Depositor”.

Also, even if you are permitted to withdraw your investment anytime after 6 months, the company will pay 1% lower rate of interest than the applicable rate.

As I started writing this post, the share price of Gitanjali Gems Ltd. was at Rs. 181.10 on the National Stock Exchange (NSE) and Rs. 183.15 on the Bombay Stock Exchange (BSE), locked down at the lower circuit of 5%. Let me tell you that there were 404 sell orders pending on the NSE alone, with the sellers desperate to find an exit door by selling 1,32,37,259 shares of the company. But they are not able to do so as the buyers are just not interested in paying even Rs. 181.10 for a stock which touched an intraday high of Rs. 534.05 on June 20th this year and has fallen 66.08% since then, hitting new 52-week lows.

In fact, Gitanjali Gems is not the only stock in the Gems & Jewellery sector which has seen a sharp fall in its share prices. Titan, Shree Ganesh Jewellery House, Tribhovandas Bhimji Zaveri (TBZ) etc. are some of the companies which have suffered huge market cap erosion due to a sharp fall in their share prices in the last one month or so. 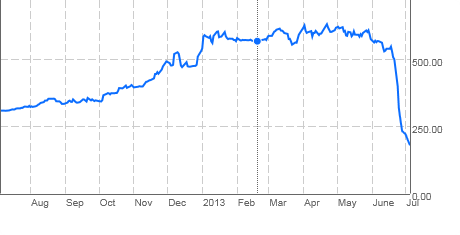 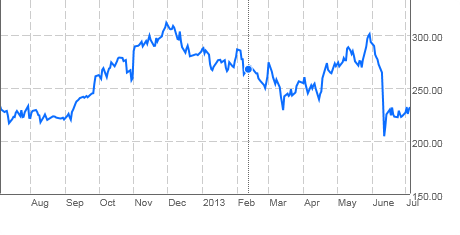 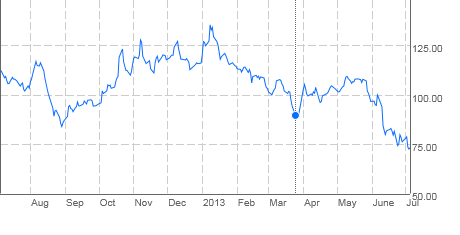 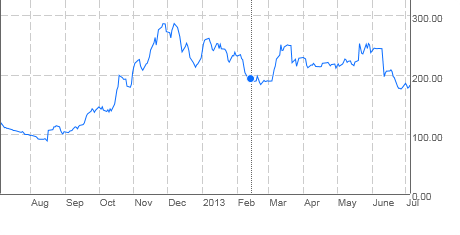 The primary reason behind this huge fall in the share prices of all these companies which belong to the Gems & Jewellery sector is very well known – a steep fall in gold prices in the international markets, which was triggered by fears of the US Federal Reserve tapering quantitative easing (QE). Gold prices have fallen around 35% from a 52-week high of $1804/oz on October 4th last year to touch a 52-week low of $1179/oz on June 28th last week.

Also, the government and the Reserve Bank of India (RBI) have taken several measures in the past few months to slow down gold imports, which have been blamed for the widening of our current account deficit (CAD). Last month, the government raised the import duty on gold from 6% to 8%, after which the RBI issued a notification, restricting gold imports only with 100% cash margin. Due to all these factors, gold demand has slowed down considerably here in India.

But, what is wrong with Gitanjali Gems? Analysing its financial statements, it seems the company has been doing quite well in the past and stands on a very strong footing. So, do the measures taken by the government and the RBI make business so difficult for the company that it is likely to see a sharp fall in its profitability or make the company default on its loans and other credit facilities? Are all these the only factors behind this kind of a steep fall in the share prices of Gitanjali Gems? I do not think so. I think there is something else also and SEBI is likely probing that.

SEBI’s surveillance department has taken up the matter and sought reports from exchanges on the stock’s sharp price movement. Market rumors also suggest that SEBI is also examining a suspicious trading link between Gitanjali and Prime Securities, a well known broker firm. It suspects that Prime Securities had a role to play in the internal funding of as much as Rs. 75-100 crore during Gitanjali’s IPO period.

At the end of March 31, 2013, Gitanjali Gems carries a gross debt of Rs. 5,000 crore in its balance sheet, at an average rate of interest of approximately 8%. As on this date, the promoters of Gitanjali have around 34.96% of their shareholding being pledged with their lenders.

Since June 18th, Gitanjali Gems has made several filings to the BSE, in which it has disclosed that Mehul Choksi, Chairman and Managing Director of Gitanjali Gems, has purchased a large quantity of Gitanjali shares from the open market and have pledged them further to the company’s lenders. In the past few days, some of the lenders have even invoked these pledges, including Macquarie Finance (India) Private Limited (MFIPL) which has invoked 5 million pledged shares in just two days, June 28th and July 1st, acquiring 5.43% stake in the company. Lenders generally invoke pledged shares when a borrower, faced with a steep fall in its share price, is not able to deposit additional margin with the lenders.

So, amid all this high-tension drama playing out within the company and the gold market, is it advisable to lock your money for 3 years in Gitanjali Gems’ Fixed Deposit scheme for 12.5% annual return?

Personally, I am not going to do that as the safety of my principal is more important for me rather than a promise of higher returns and I am sure the investors also know the answer and need no further advice regarding the same.

Some financial advisors have different views regarding the same and their views are also welcome.