It is once again a bad month from India’s macroeconomic health point of view. On the one hand, Index of Industrial Production (IIP) for the month of October 2013 has contracted 1.8% against analysts’ expectations of a contraction of 1.2% and on the other hand, inflation based on the consumer price index (CPI) has again jumped to a nine-month high of 11.24%.

Vegetable prices, led by onions and tomatoes, rose 61.6% in November from their prices a year earlier and have been the biggest contributor to a sharp increase in inflation.

Both these figures carry a lot of disappointment for the RBI, the government, manufacturers, importers, traders, investors, people who are already finding it difficult to sustain their lifestyle due to high inflation and many others here is India.

Inflation based on the wholesale price index (WPI) is up for announcement on Monday and market participants don’t have high hopes out of this number as well.

India’s export-import data for November 2013 also got announced yesterday by the Department of Commerce. As expected, India’s trade deficit has been consistently under control to remain at $9.22 billion for the month after the Diwali season. Here is the summary of trade data including gold and oil imports: 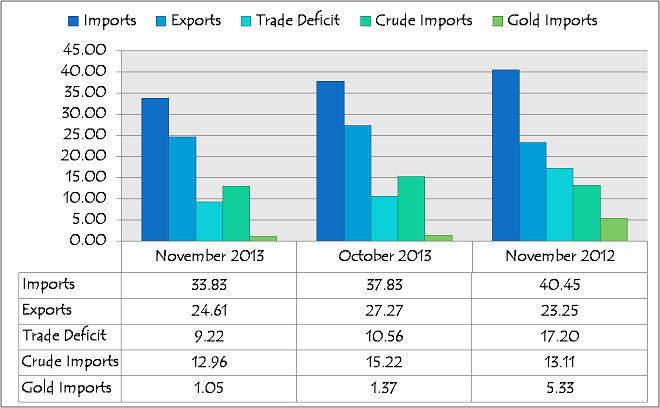 (Note: Figures are in US $ billion)

Trade Deficit in November came out to be $9.22 billion, lower than last month’s $10.56 billion, and much lower than last year’s figure of $17.20 billion. Trade deficit figure of less than $10 billion is psychologically satisfactory and makes analysts confident about CAD to remain below its targeted levels.

Exports – After a growth in the last few months due to various reasons, including a mild recovery in the U.S. or European countries, weak Indian currency and the government’s incentives for exporters, India’s export numbers in November contracted somewhat to settle at $24.61 billion.

Imports – Imports in November came out to be $33.83 billion as against last month’s imports of $37.83 billion, a fall of 10.57% and last year’s imports of $40.45 billion, a decline of 16.37%. People who wanted to see a lower trade deficit or lower current account deficit (CAD) cheered after seeing the positive shape of our import numbers. But, sadly their joy would be short-lived with today’s bad IIP and inflation numbers.

Though trade deficit has been satisfactory, inflation, growth and fiscal deficit pose a big challenge for both the RBI and the government. High CPI inflation will put a lot of pressure on the RBI to raise the Repo Rate again in its upcoming monetary policy on December 18th. But, will another rate hike be able to control vegetable prices and overall inflation to move up even higher? I really doubt.

With an expected jump in bond yields tomorrow, tax-free bond investors can now expect even higher rates with the upcoming issues. But, for the equity investors, it has been a short-lived relief rally again which we saw after the state election results. A deep fall from here might bring an opportunity for the long-term investors.

I also want to question the government – what it was doing when the prices were going up due to its so called ‘hoarding’ by a few traders? Did we see/hear any kind of action being taken against those hoarders? I did not. So, its consequences are in front of us. It would be a big trouble for the policymakers in the near term. What is up next – more trouble for the government, the consumers and the investors of India?