But, contrary to market expectations, Dr. Raghuram Rajan today surprised most of us and decided not to hike the policy rates, including the Repo Rate, Marginal Standing Facility (MSF) Rate and the Cash Reserve Ratio (CRR).

He left the Repo Rate unchanged at 7.75% and the MSF Rate at 8.75% and also assured the markets about its commitment to keep the difference between these two rates at 100 basis points or 1%. It was really a pleasant surprise and gave both the equity markets as well as the debt market a much needed relief.

Why he did not hike the rates despite high inflation?

Dr. Rajan has a view that the recent unusual spike in inflation, due to unseasonal upturn in vegetable prices, is temporary in nature and the prices have already started declining in some of the metro cities, as swiftly as they had increased.

Also, as most analysts believe, a rate hike has not been a successful tool so far to anchor inflationary trends, Dr. Rajan wants to wait for more macroeconomic data to pour in before he takes his call next month.

This is what the RBI did and had to say today:

Though it has been left unchanged for now, the governor has made it very clear that the central bank will not stop itself in hiking these rates quickly if the inflationary situation doesn’t improve as expected.

MSF Rate unchanged at 8.75% – Marginal Standing Facility (MSF) Rate is also linked to the Repo Rate and though people were speculating that it will also be hiked by 0.25% along with the Repo Rate, the RBI has left this rate also untouched at 8.75%. This is the rate which the RBI charges to the scheduled commercial banks for the money borrowed for their overnight liquidity requirements.

Cash Reserve Ratio (CRR) unchanged at 4% – Along expected lines as always, RBI has left the CRR unchanged at 4%. After Pratip Chaudhuri, the former Chairman of SBI, now nobody asks the RBI to cut CRR from its current levels.

Impact on stock markets – After ending in the red for six straight sessions, the stock markets today rejoiced the RBI’s decision and called it a pre-Christmas surprise gift by Dr. Rajan. Markets opened on a positive note and had a sharp spike immediately after the RBI announcement at around 11 a.m. BSE Sensex closed up 247.72 points (or 1.20%) at 20,860 and NSE Nifty closed up 78.10 points (or 1.27%) at 6,217.

Impact on debt markets – 10-year benchmark 8.83% G-Sec yield closed at 8.78%, 13 basis points lower than Tuesday’s close of 8.91%. It was again a good news for the debt fund investors as most of these schemes ended the day on a positive note.

Impact on currency – Despite a strong upmove in the markets, the rupee declined 8 paise to close at 62.09 against yesterday’s close of 62.01. Market participants were cautious to deal in the currencies markets ahead of the US FOMC meeting today. 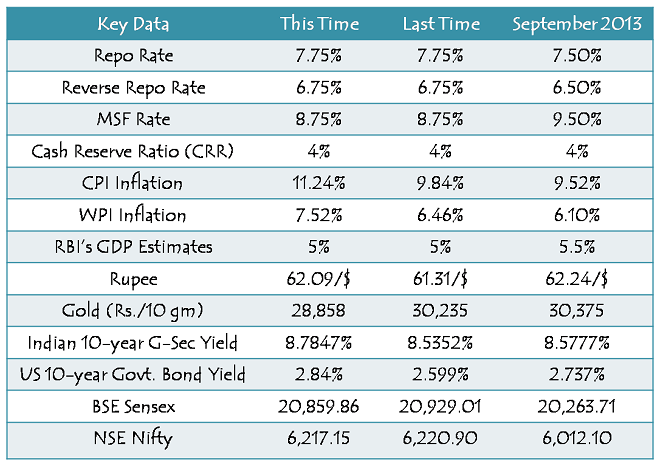 Though we are still facing higher and higher growth in consumer inflation in the last few months, today’s so-called ‘brave’ decision by Dr. Rajan has brought much required welcome relief for the markets. What I have been able to make out of Dr. Rajan’s policy decisions and the RBI’s commentary is that they want to give India’s economic growth a chance to recover and probably one more opportunity to the government also to take measures to curb speculative inflation.

As I finish writing this post, the US Federal Reserve has decided to start tapering quantitative easing (QE) by cutting down its bond purchases to $75 billion a month as compared to $85 billion earlier. It would be the first such step towards unwinding the stimulus that has been in place for quite a long time now.